The SIU is investigating after an alleged break-in at Square One Shopping Centre in Mississauga that resulted in a car crash that sent two suspects and an officer to hospital. The suspects are also under arrest, according to police.

Two vehicles, a Porsche and a police cruiser, were involved in a brief chase that lead to damages. The Porsche crashed into a flower bed and some bushes.

Officers are holding the scene as they wait for details on the extent of suspects’ injuries.

The SIU investigates incidents involving police in which someone is killed, injured or accused of sexual assault.

Police were called to Square One Shopping Centre on City Centre Drive, in the area of Hurontario Street and Burnhamthorpe Road West, at 3:41 a.m. for a report of a break-in, according to Const. Iryna Yashnyk, spokesperson for Peel Regional Police. 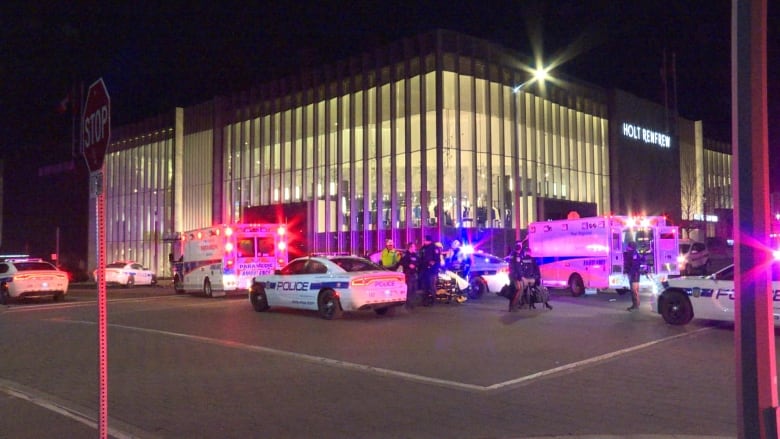 Emergency vehicles at the scene of an arrest early Wednesday at Square One Shopping Centre in Mississauga. Peel police say they have arrested two people after an “interaction” and a brief police chase. (Tony Smyth/CBC)

According to Yashnyk, officers located the two suspects in the area, then the police cruiser and a vehicle collided.

“There was an interaction where the two culprits and one officer were taken to a local hospital,” she told CBC Toronto.

Yashnyk could not confirm whether the suspects were seriously injured, but said the officer suffered injuries believed to be minor.

She declined to say if the injuries sustained by all three people were due to the crash. They are all still at the hospital, she added.

The ages and sexes of the suspects have not been released. No charges have been laid yet.

Asked if the suspects allegedly entered the mall, she said: “It appears so.”