Lawyers and doctors gathered at Queen’s Park on Tuesday to protest against a provincial government funding cut to legal aid that they say will endanger Ontario’s vulnerable people.

Speakers told the crowd of about 150 in Toronto that the cuts will cause hardship to low-income groups that rely on legal aid to obtain justice. These groups include refugees, immigrants, domestic violence victims, homeless people and members of the LGBT community.

In its April 11 budget, the Doug Ford government cut funding to Legal Aid Ontario by about 30 per cent, or $133 million, in its 2019-2020 fiscal year. The province has also told the agency that it can no longer use provincial funding for refugee and immigration legal services.

“We’re here to stand with the community. We’re here to protect them and stand up for their rights,” Sheau Lih Vong, a Toronto immigration and refugee lawyer, told CBC Toronto as people chanted in the background.

“I’m here to speak up against the cuts because I think they were made recklessly and unilaterally. It’s going to affect a lot of my clients, a lot of vulnerable populations.

At the morning rally, some lawyers wore black judicial robes, while some doctors wore white lab coats. Nurses took part in the rally as well. Many people brought placards in bright colours. There was a red banner that read: “Dump Thug Ford with a General Strike.”

According to the budget, the government is “streamlining the delivery of legal aid to promote long-term sustainability” and the province is expected to reduce Legal Aid Ontario’s funding by $164 million in 2021-22.

Dr. Samantha Green, a Toronto family physician at the rally with her baby, said the cut will have an extremely negative impact on refugee claimants.

“It doesn’t make sense to me to not allow access to legal aid to refugee claimants. They’ve already experienced so much hardship when they come to Canada. And we need to grant them access to justice,” she said.

Without legal representation, refugee claimants will be subject to extreme stress, and that will make any existing health conditions, physical or mental, much worse, she added.

Nathalie Des Rosiers, Ontario Liberal justice critic, said the cut could mean that some refugee claimants are not able to stay in Canada. She said both lawyers and doctors are recognizing that the impact of cut is massive.

“I think it has the potential of sending people back to places where they could die. That is what is really at stake here,” she said.

“A 30 per cent is huge. It’s bad policy. It’s bad for the justice system. It’s being on the wrong side of history on this one.”

She said it means people will have to represent themselves in court and it could create a backlog of cases.

“Legal aid provides vital services and that is why it is essential that we do everything we can to ensure that it has accountability and transparency and that it is sending the hundreds of millions of taxpayer dollars to the front-line services that are so desperately needed,” she said.

Mulroney sidestepped the question of whether the cut will deny legal services to people who need it.

“While some lawyers may not welcome this renewed accountability at legal aid, it is essential for legal aid clients and for the taxpayer of Ontario that is spending so much money to ensure that those people in Ontario who cannot afford legal representation are able to get that.”

According to the protest organizers, refugees will no longer be able to obtain legal aid funding for services except help with filling out forms to initiate claims. That form represents less than half of the services that used to be available to refugees for their claims before the cut took effect.

For new refugee claimants after April 16, 2019, Legal Aid Ontario will no longer provide such services as appeals when refugee claims are denied, humanitarian applications for people who have established themselves in Canada, and representation at detention proceedings.

The agency is waiting to hear from the federal government about whether it will increase funding to enable the agency to provide the services it did before the province cut funding, according to Graeme Burk, spokesperson for Legal Aid Ontario. 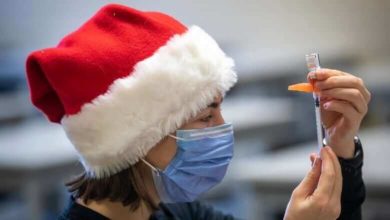