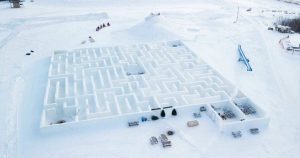 A Manitoba snow maze now has the honour of holding the Guinness World Records title of being the world’s largest.

“It feels good like, when people ask, we can actually say Guinness says we’re the biggest. We are, in fact, the biggest,” said Clint Masse, who owns A Maze in Corn near St. Adolphe with his wife.

The couple found out Monday morning they were successful in their quest to beat the world record for the largest snow maze. Guinness World Records said it had been held by Fort William Historical Park in Thunder Bay, Ont.

Masse was confident his family’s maze, which had roughly 300 truckloads of snow and 1,300 metres of tightly packed snow walls, would win, but remained tight-lipped when asked for the maze’s precise size, careful in case competitors were paying attention to the news.

“We thought we could do it, but you’d never know because of the people in the woodwork that might be making these snow mazes as well … and so, that’s why it feels really good. It’s official at one time in history. Manitoba has the biggest snow maze in the world,” Masse said.

The maze attracted visitors from around the world, including places like Spain and Pennsylvania. Masse recalls visitors from the American state who drove to Manitoba just to make their way through the maze.

The maze was a bit of a leap of faith for A Maze in Corn, which had the worst sales in 21 years, thanks to a cold damp fall that left the business with a financial hole. Masse expressed his gratitude for the many visitors who came to check out the maze despite brutally cold weather this winter.

“We were just thankful that we got the expenses paid, and then now we’re kind of where we should have been at the end of October and just kind of a renewed vigour with it, and with the new enterprise and watching people enjoy it in winter. It was invigorating for us, for sure.”

Masse said they will build a new snow maze again next year with some artistic add-ons and might make the puzzle a touch bigger than it was this year.

The process of getting in Guinness World Records involved the hiring of a surveying company, which 3D-scanned the entire maze for accuracy, Masse said, adding it had attracted a film crew, which was at the site Monday to do a movie about the maze.

“It’s going to be a snow-mazing romance,” he laughed.