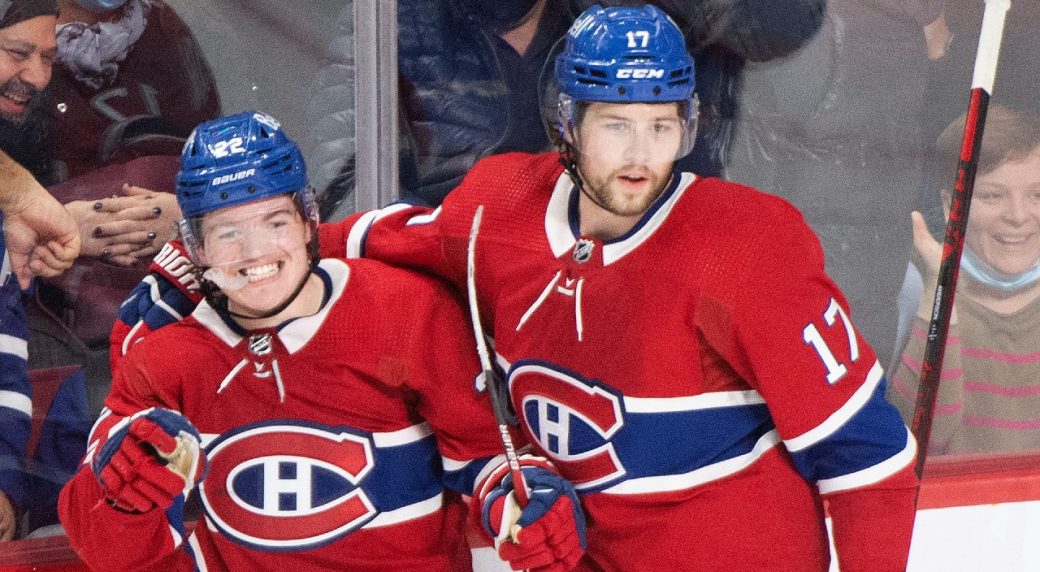 It’s just under eight minutes into the third period of a nail-biter between the Montreal Canadiens and Toronto Maple Leafs when Jake Allen cuts across his goal crease, sprawls out and deflects Mitch Marner’s one-timer out of play with his blocker. It’s the most pivotal save of the game, perhaps the best one Allen has made in his two seasons with the Canadiens, and the fans have a sense for what happened but haven’t fully processed it.

Accurate representation of @Steve_Dangle‘s face when…

But with Superman’s music running through the PA system as the replay hits the scoreboard, they rise to their feet, and an eardrum-shattering below emanates from them. Allen’s name is chanted, and it’s one of several moments that turn a regular-season game between a Leafs team destined for the playoffs and a Canadiens team already mathematically eliminated into an instant classic.

That Allen made this stop just seconds after William Nylander scored a power-play goal to tie the game at 2-2 was one thing. That it was one of 49 saves he registered to help the Canadiens win 4-2 was another.

A few hundred seats were vacated by Leafs fans by the end. But Montreal fans stayed en masse to give Allen his due as first star of the game.

They made this a special night from the start.

They tried to rally the Canadiens when Auston Matthews got the Leafs on the board just 36 seconds in and even after the home team surrendered 11 of the first 12 shots. They eventually succeeded after David Savard tied the game 1-1 in the 10th minute of the second period.

The noise level rose considerably when Cole Caufield gave the Canadiens a 2-1 lead with his 14th goal of the season, and it was deafening when Paul Byron scored with 2:28 remaining in the third to give them a 3-2 lead.

None of it was to be taken for granted. Not after two years in a mostly empty or half-full Bell Centre, and certainly not by players — and coaches — who grew up watching this age-old rivalry play out on Saturday nights past.

Martin St. Louis, a native of Laval, said it was a “great feeling,” watching his Canadiens ride the wave the crowd propped them up on.

Savard, from Saint-Hyacinthe, Que., said the reality of playing in playoff-style, Saturday-night game between Montreal and Toronto met his childhood dream.

And then there was Allen, who didn’t get to enjoy an experience like this at any other point in his short Canadiens’ career, with Saturday’s game being the first one between these teams played in front of a full-capacity crowd since Jan. 8, 2020 (months before the pandemic started, when Ilya Kovalchuk scored the overtime game-winner to elicit the type of attention Allen garnered throughout this night).

“I think these games are special for me personally, especially where I come from,” the 31-year-old Fredericton native said. “And there’s a lot of New Brunswickers here tonight, too. It connects close to home. It’s something I always grew up watching — Montreal-Toronto on Hockey Night in Canada — like most of the guys did here. Special to be in there, be able to play between the pipes and get the win.

“And on top of that, it’s against the Leafs. I know it’s another game, but at the same time it’s a pretty special feeling no question.

“Not many guys, when their careers are over, get to look back and say they played for the Canadiens, especially in goaltending. I think from a goalie’s aspect, it’s always a prized position. (Carey Price has) had it locked in for a long time and still will, but just to be able to play for the Canadiens, Saturday night at the Bell Centre, it’s tough to beat.”

It’s not like this everywhere, and it’s probably not like this anywhere for a team that’s spent the majority of its season in last place in the NHL and been eliminated from the post-season 18 games before the schedule ran out.

“Incredible,” is how Byron put it. “Can’t say enough about the fans and the support we get here. We know it’s been a long season, we haven’t been our best. So, to be where we’re at in the standings, to come in night in, night out and have that kind of atmosphere is incredible. It’s a testament to Montreal fans, and we’re truly lucky to play in this building night in, night out.”

Accurate representation of @Steve_Dangle‘s face when…

What those in attendance received Saturday night was a show — even with the Canadiens being outshot 51-18.

Did Allen steal the game? Of course.

But the Canadiens also laid it on the line against a far superior Leafs team, and they did it for most of the night with only 10 forwards after both Tyler Pitlick and Michael Pezzetta left with upper-body injuries.

Alex Romanov played a career-high 27:16, Nick Suzuki had two assists and played 22:43, Christian Dvorak scored the insurance marker after having an earlier goal called back, and this was one of Savard’s best games of the season.

Much of it happened because of the jolt of energy the fans offered.

“Being on the ice as a player is a great feeling when your crowd gets behind you like that,” said St. Louis, who experienced that a lot during his Hall-of-Fame playing career but is now seeing it through the lenses of a young coach.

“You’ve got momentum, you come in waves, and I felt we did that in that second,” he said. “Great feeling. The home advantage is a big advantage. And as a coach having the last change, it’s a big advantage when that crowd’s behind you and you’re riding the momentum, and you saw that tonight.”

It was thrilling when Allen made that stop on Marner. It was exhilarating all night long.