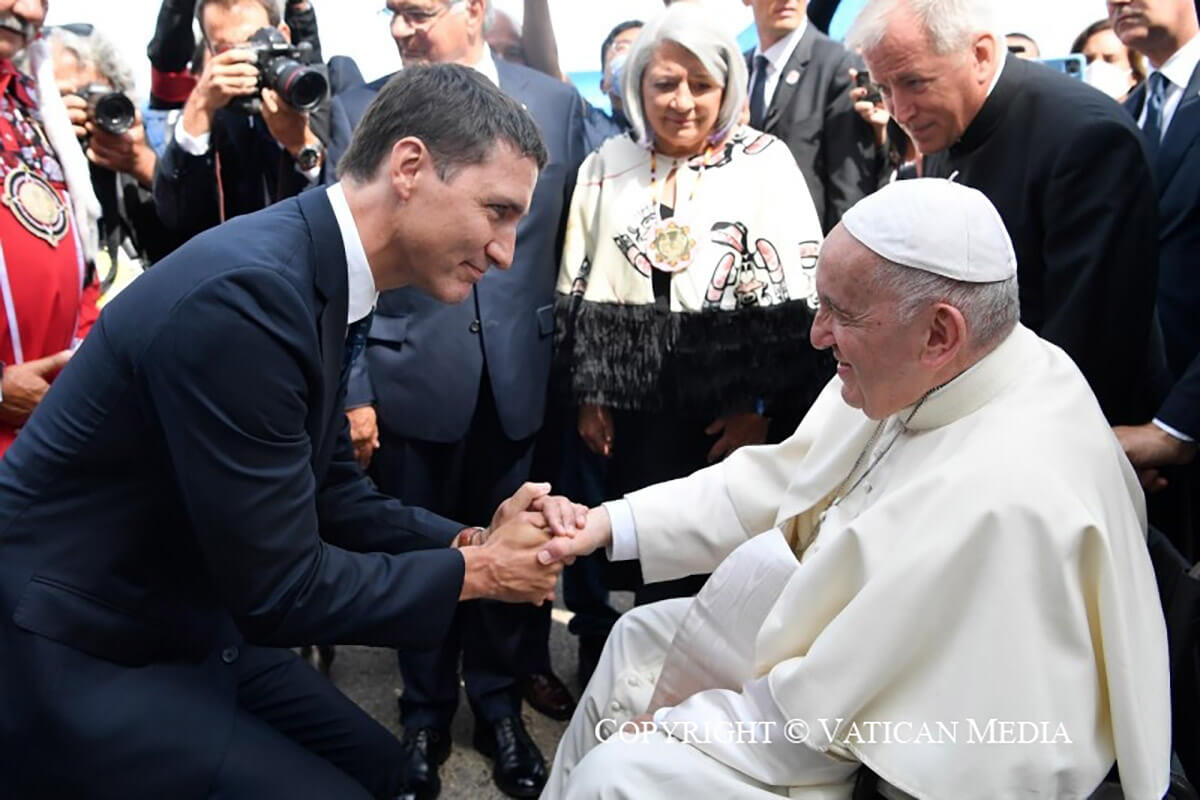 Pope Francis on Monday (25) asked for “forgiveness for the evil committed” against Canada’s natives, particularly in the boarding schools for children run by the Catholic Church and lamented that some of its members have “cooperated” in policies of “cultural destruction.”

“I am sad. I ask forgiveness,” the Catholic Church’s high pontiff told thousands of natives in Maskwacis, in western Canada, where he arrived Sunday (24) for a “penitential pilgrimage”, a gesture they had hoped for years.
Referring to a “devastating error,” Pope Francis acknowledged the Church’s responsibility in a system in which “children have suffered physical and verbal, psychological and spiritual abuse.”

In total, the pontiff asked for “forgiveness” three times, “with shame and clarity,” in what it was the first speech of a long-awaited trip, delivered at the site of the former Ermineskin boarding school in the presence of many survivors from indigenous communities such as First Nations, Métis and Inuit.

“The place where we are now resonates in me a cry of pain, a muffled cry that has been with me for the past few months,” he shot back, referring to the “traumas” suffered by generations of Indigenous people and the “wounds still open.”

Between the late 19th century and the 1990s, 150,000 indigenous children were forcibly conscripted into more than 130 of residential schools. There they were isolated from their families, language and culture, and were often victims of violence. At least 6,000 children died in these institutions.

The discovery in 2021 of more than 1,300 unmarked graves near these schools has caused a shockwave in Canada, which is slowly opening its eyes to this past, described as “cultural genocide” by a national commission of inquiry.

“Policies of assimilation ended up systematically marginalizing indigenous peoples (…) Their languages and their cultures were denigrated and suppressed,” Francis continued. “Remembering the devastating experiences that took place in residential schools affects us, makes us indignant and hurts us, but it is necessary,” he added.
Stressing the need to “remember,” Pope Francis, who is now 85 years old, further assured that “the apology [was] not an end point,” but “only the first step” on the path to “healing.” The leader of the Catholic Church arrived last Sunday (24) in Edmonton, Alberta, for the first of three stops on his trip.

The Pope has already apologized to a delegation of native Canadians at the Vatican last April but they insisted at the time the apologizes would have to be done in Canadian land. After the historical speech from Pope, the Governor General of Canada, Mary Simon, an Inuk person who became the first Indigenous person to hold the office, urged in a statement that there are some truths about Indigenous history that are difficult to face – “Indigenous peoples, especially Survivors, have lived with a legacy of abuse that has left scars on their lives, and on the lives of those who love them. Some children and families have never recovered. Some children never made it home at all”.

Now the journey of reconciliation could be long to achieve, but there is some hope that Catholic Church and Indigenous can work together and make progress. “For Indigenous peoples, this is neither the beginning nor the end of the healing journey. As a country, we must ask ourselves, Where do we want to go next? Who do we want to be? As we continue our conversation on reconciliation, let us all work together in a spirit of hope and renewal to help build a more just society and a better tomorrow”, she mentioned.

But words won’t be enough to heal the scars, it will take more than that to make real progress through reconciliation. “Today was a day that moved us forward, giving Survivors words that may help them heal. Yet it is also a day that can raise complex emotions, especially as the Papal visit continues. It is for each Survivor and their families to decide how they feel and what they need to move forward. And it is for each of us to continue embracing hope and supporting reconciliation not just through words, but also through actions”.

The Catholic Church ran about 60 per cent of residential schools in Canada but the Canadian government sponsored them. The first of these institutions opened, the Mohawk Institute, opened in Brantford, Ont in 1831 and the last one to close was The Gordon Residential School in Saskatchewan in 1996. The last papal visit to Canada took place 20 years ago, in July, 2002, when Pope John Paul II attended World Youth Day.