Typically, as the United States of America prepares each year to celebrate the anniversary of its independence, it typically extends attention to the “founding fathers” but also the legacy of slavery and racism that has permeated so much of American history. 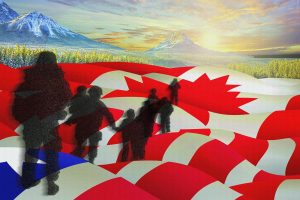 As in previous years, but perhaps with a commitment not seen since the 1960s, across the United States and an in Canada there have been calls for reform to policing and an end to the disturbing historical cycles of violence that are all too familiar.

The current activism of the progressive civil rights movement was sparked by the killing of George Floyd at the hands of Minneapolis police officers. The protests have taken place across the world. This includes within Canada where these issues have moved to the forefront of our political, social and economic discourse.

Canada and the United States share the longest international border on earth and its bilateral relationship is one of the world’s closest and most extensive. Before the Coronavirus pandemic, the volume of trade was nearly $2 billion a day in goods and services. ln addition, about 400,000 people cross between the two countries every day. Both Canada and the United States celebrate their national holidays of inception in July, with only 3 days apart, however the history of the United States and Canada vary greatly.

As noted in my last article, Canada’s birth was one of evolution in contrast to the United States which was a nation born out of a revolution. On July 4, 1776, the 13 colonies claimed their independence from Great Britain, an event which eventually led to the formation of the United States.

Before 1776, the United States was like Canada a colony of Great Britain, but on September 9, 1776, the Continental Congress formally declared the name of the new nation to be the United States of America. Native Americans and First Nations people had named this part of North America Turtle Island.

The name America derives from the Italian explorer who mapped South America’s east coast and the Caribbean Sea in the early 16th century, Amerigo Vespucci (1454-1512). Amerigo set forth the then revolutionary concept that the lands that Christopher Columbus sailed to in 1492 were part of a separate continent.

This new nation founded in the Age of Enlightenment, had individual thinkers that had remarkable ideas concerning liberty and equality and built an impressive system of government that still endures today. However, this new nation was also began as a slave society and it has taken centuries for the scars that were left on the legacy of black Americans to begin to heal.

Slavery in the United States existed from the beginning of the nation until passage of the Thirteenth Amendment in 1865 that abolished the hideous practice. Incomprehensibly, under the law, a black enslaved person was treated as property and could be bought, sold, or given away. Slavery was unfortunately common in many parts of the world at that time.

The institution of slavery was felt throughout the Americas and there were a series of revolts against this oppressive system. One of the most noted was that on August 22nd, 1791, when Haitians revolted and had a successful insurrection by self-liberated slaves against French colonial rule in Saint-Domingue, now the sovereign state of Haiti. Unfortunately, Haiti’s legacy of debt began shortly after gaining independence from France in 1804. ln 1825, France, with warships at the ready, demanded Haiti compensate France for its loss of slaves and its slave colony. ln exchange for French recognition of Haiti as a sovereign republic, France demanded payments in the millions.

The issues of race founded in slavery and the treatment of the First Peoples of the Americas is still affecting our political, social, and economic discourse up to this day. ln the United States, there is a widening rift between blacks Americans and white Americans over the legacy of race issues which has impeded the attainment of commonly shared values of civic ideals that could serve to unite the nation across racial lines and finally lead to a true resolution and to fairness.

There is no question that both in Canada and the United States there is need to better deal with races issues across the board with government and policing institutions developing and implementing action plans to better address wrongs. 1 am strong believer in the advancing civil rights through nonviolence and civil disobedience as inspired by Dr. Martin Luther King Jr. and Mahatma Gandhi. As Martin Luther King stated “Peace cannot be kept by force; it can only be achieved by understanding. Darkness cannot drive out darkness; only light can do that. Hate cannot drive out hate; only love can do that.” These inspirational words of Dr. King should still resonate today.

ln an age when the discussion of race has become mired in politics once again, this may be the right lime for the United States to set up a Truth commission to deal with some of these painful past histories of injustice. Perhaps the most recognized example was South Africa’s Truth and Reconciliation Commission, established in 1995 at the end of apartheid. Canada had similar processes aimed at righting wrongs and documented the legacy of physical and sexual abuse inflicted on thousands of Indigenous Canadians in a program of forced assimilation and education. Truth commissions promote reconciliation when they help victims heal from the wounds of the past by publicly acknowledging those wrongs.

To our friends and neighbours, Happy Fourth of July.