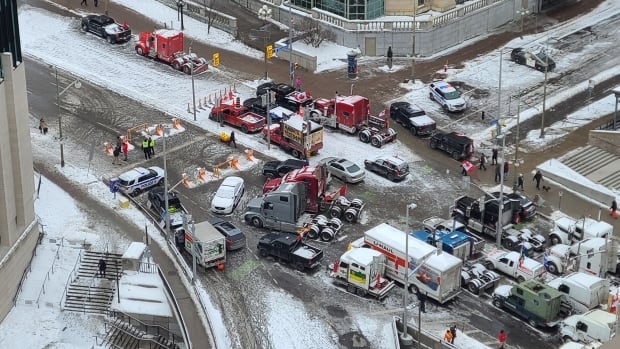 In its most obvious display of enforcement against the anti-pandemic rule demonstration that arrived in Ottawa 10 days ago, dozens of heavily armed police officers descended Sunday night on the baseball stadium parking lot that’s been serving as a staging area for the protesters in the downtown core.

Police removed vehicles and at least one tanker of fuel that was stored at the Coventry Road lot. Ottawa police later announced they had arrested two people at the site, with other arrests elsewhere that day linked to protest activity.

About 10 protesters in reflective vests stood firm in front of fuel supplies that were stored toward the southern end of the lot.

Snipers stood guard on the roof of the stadium and hotel on either side of the parking lot as police moved through the camp.

Protesters yelled “Shame, shame” and “On the wrong side of history” at the officers. As police moved in to act, one protester was heard saying “This can’t end well.” There have been no reports of injuries.

There is still believed to be more fuel and other supplies such as food stored at the parking lot, which volunteers have been shuttling to the protesters jamming the so-called “red zone” around Parliament Hill.

Ottawa police said Sunday they would be stopping these deliveries. Protesters say they plan to continue to bring cans of fuel downtown.

Organizers say they’re trying to annoy residents and politicians into accepting their goals.

They’re no longer taking fuel to protesters in Confederation Park across from city hall, which police said has been cleared and fenced off. A wooden pop-up restaurant was moved from the park to the Coventry lot earlier Sunday.

Police have conceded, in retrospect, allowing trucks to park at the city-owned RCGT Park east of downtown was a key error in what they call an unprecedented protest.

When they offered the lot to the demonstrators more than a week ago, the idea was to get the trucks out of downtown. But protesters soon organized themselves into a supply camp, complete with large tents for food and recently, the addition of three working saunas.

The dramatic police raid will surely be one of many issues discussed at the emergency council meeting set for 1 p.m. ET Monday to address, according to the agenda, the “impact of the truck convoy demonstration of the city’s residents and businesses.”

A number of councillors have been vocal in their criticism that the police need to be shown to be enforcing the law and Sunday night’s clear show of power will likely be well-received.

Council is also likely to address other measures that a number of councillors have been calling for, whether it’s to request help from the military — which the prime minister has said the country has to be ” very, very cautious” with — to asking for the RCMP to take over policing on Wellington Street, even though the roadway is the city’s responsibility.

The police received approval from the Ottawa Police Services Board at an emergency meeting Saturday to swear in 257 RCMP officers as special constables. It’s not clear how many RCMP officers have joined the local ranks so far.

WATCH | Ottawa’s mayor on the number of police available:

Ottawa police are stepping up pressure on convoy protesters, seizing fuel and making arrests, says Mayor Jim Watson, but the city has also requested more police from the OPP and the RCMP. 4:52

Mayor Watson is also expected to discuss his reasons for declaring a state of emergency on Sunday, characterizing these demonstrations as “the most serious emergency our city has ever faced.”

While the city’s state of emergency gives the municipality few sweeping powers — it mostly makes it easier and faster for the municipality to buy supplies, including tow trucks — a provincial declaration of an emergency brings with it more powers.

Under the Ontario Emergency Management and Civil Protections Act, the province can, among other things, limit the movement of people within the city.

For example, it could stop people who cannot prove they live or work in the “red zone” from walking in and out of the area.