While new federal figures show the emergence of new cases of COVID-19 is slowing in some parts of Canada, the pandemic continues — and some regions and age groups are being hit particularly hard.

During a briefing in Ottawa this morning, Canada’s Chief Public Health Officer Dr. Theresa Tam and her colleague Dr. Howard Njoo walked Canadians through their updated modelling on the number of COVID-19-related illnesses and deaths Canada could see over the next few weeks.

The report highlights how different provinces are experiencing the pandemic.

Ontario and Quebec have accounted for more than 90 per cent of national COVID-19 cases in the past 14 days, according to Tam and Njoo.

There has been no community transmission in Prince Edward Island, the Northwest Territories and the Yukon, and no cases have been reported to date in Nunavut.

The numbers show COVID-19 is still disproportionately hitting Canadians in long-term care and seniors’ homes; they represent 18 per cent of all cases and 82 per cent of Canada’s 7,495 deaths.

It’s the third time Canada’s leading public health officials have given an update on the expected impact the novel coronavirus will have on the Canadian population. It comes as some provinces have reported a downturn in cases and are beginning to reopen their economies, including some schools, stores and parks.

‘Not out of the woods:’ Trudeau

“The data shows that we are continuing to make progress in the fight against this virus. In many communities, the number of new cases is low and we can trace where there came from. That’s an encouraging sign that the virus is slowing and in some places even stopping,” Trudeau told reporters outside his home at Rideau Cottage Thursday morning.

“But I want to be very clear, we’re not out of the woods. The pandemic is still threatening the health and safety of Canadians.”

As of Thursday morning, Canada has 93,085 confirmed and presumptive novel coronavirus cases, with 51,048 of the cases considered recovered or resolved, according to data compiled by The Canadian Press.

Ontario reported 356 additional cases of COVID-19 on Thursday as the province’s network of labs processed a record number of tests for the novel coronavirus.

The 1.2 per cent jump in cases brings the total in Ontario since the outbreak began in late January to 29,403.

According to CBC News figures, as of May 5 there were more than 62,000 confirmed and presumptive coronavirus cases and 4,166 people had died. 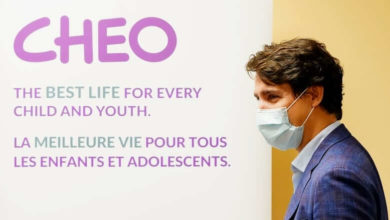