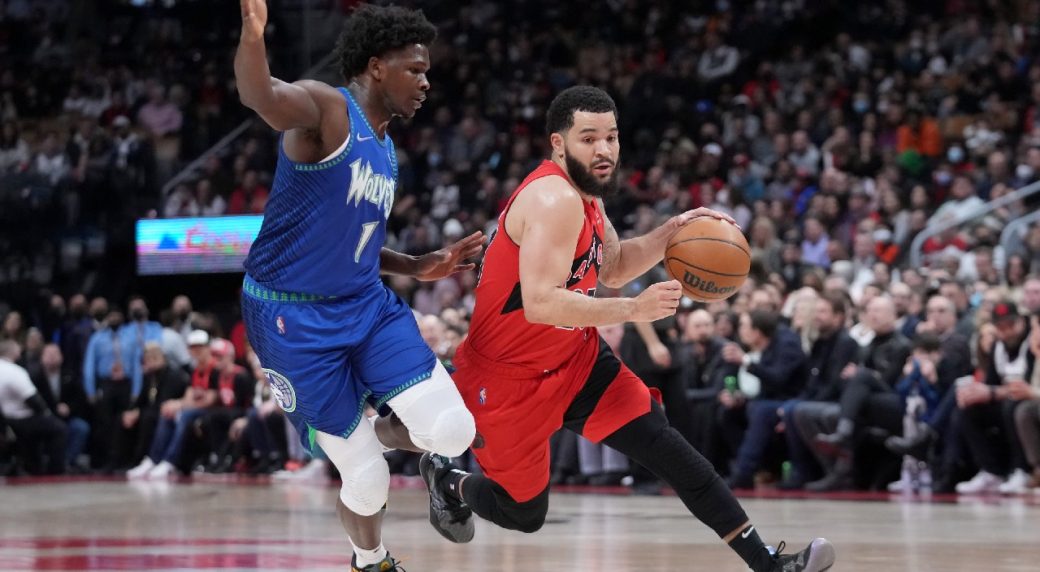 It hasn’t happened very often, but for just the 20th time this season the Toronto Raptors had their preferred starting lineup available and — for one of the very, very, few times in a season that was 76 games in as of Wednesday night — they had their entire rotation healthy, too.

“Khem’s in, and everyone else is too,” said Raptors head coach Nick Nurse before his team hosted the Minnesota Timberwolves at Scotiabank Arena, referring to Khem Birch, who had missed the previous game with swelling on his knee.

Good health is always reason to celebrate, but for the Raptors it’s cause to contemplate: why has their preferred staring line up simply not been all that effective?

In the 19 games they have been able to roll out Fred VanVleet, Pascal Siakam, Gary Trent Jr., and OG Anunoby, Toronto can point to their 13-6 record and say, ‘hey, good things happen when they can play together.’

But as a group they haven’t exactly been the 2015-16 Golden State Warriors.

“The main thing is that the record is good,” said Nurse before the game. “I don’t really care how we get there, what the lineup rotations are. That’s the main thing. They just need probably to play together a little bit. It’s been surprising how little they have been available. All year long, I know you guys know the exact minutes and all that stuff and the number of games, but to me it feels like hardly any at all. I think we need to get them a little more organized and a little bit more connected.”

They didn’t really look much better against Minnesota, but once again it didn’t matter as the Raptors shook off a slow start to storm back for the 125-102 win, their fourth straight. It improved their record to 44-32 and pulled them back into a tie with idle Chicago for fifth place in the Eastern Conference, two games ahead of seventh-place Cleveland who lost to Dallas. The Bulls have the tiebreaker on the Raptors, but with six games left the Raptors are very much in control of finishing no worse than sixth.

Minnesota fell to 43-34 and remains in seventh in the West.

The Raptors were led by Siakam, who followed up his season-high 40-point outing Monday with 12 points, a career-high 13 assists and 10 rebounds for his first triple-double of the season after a number of close calls. Trent Jr. led both teams in scoring with 29 and Anunoby had 22 as all five starters finished in double figures, as did Achiuwa and Thad Young off the bench, with 13 and 10 points, respectively.

The Raptors threw a number of different coverages at Minnesota star Karl-Anthony Towns and most of them worked as they held Towns — who averages 24.6 points a game on the season — to 16 points and forced him into seven of Minnesota’s 23 turnovers — to 18 by Toronto — which off-set the Timberwolves’ 18-9 edge on the offensive glass.

It was an impressive team win against a solid opponent looking to make a playoff push.

But perhaps the most telling takeaway was that the Raptors’ best moments came when Nurse went away from his starters. The game-turning second-quarter run Toronto finished the first half on featured reserves Achiuwa and Young playing key roles and when the Raptors asserted themselves even further in the third quarter Nurse opted to sit rookie Barnes in favour of Achiuwa to start the half. Coincidence or not the Raptors looked balanced at both ends of the floor with the additional spacing provided by Achiuwa’s new-found confidence in his three-point shooting (he was 3-of-7 Wednesday and continues to shoot better than 40 per cent from deep since the all-star break) giving the offence more room to breathe. The second-year big man’s nimble feet made him a capable option to guard Towns, the Minnesota big man who punishes teams from the outside-in as well as anyone in the game.

The Raptors’ first four baskets after halftime were assisted as Toronto jumped out to a quick 10-point lead, and they were able to push from a two-point lead at half to 15 points by the start of the fourth quarter. They eventually got contributions from Barnes who returned to the floor and converted a pair of offensive rebounds to help the Raptors keep the pressure on Minnesota. A generous does of Trent Jr. — who has shown a penchant for playing big against his hometown team — was also a big help. The Minnesota product had 30 when he led the Raptors to a win over the T-Wolves before the all-star break and had 14 points on 5-of-6 shooting in the third as Toronto led 97-82 to start the fourth.

It will be interesting to see which direction Nurse goes from here. With his most-used starting lineup available Wednesday, the Raptors came out of the gates flat. Just as they did against a short-handed Boston team on Monday, Toronto was behind early — 13-7 after five minutes against Minnesota when Nurse called a timeout and subbed in Birch. Things didn’t improve all that much as the quarter moved along and Nurse went three-deep into his bench. Minnesota finished the quarter on a 10-2 run to give them a 30-20 lead to start the second period.

It would be hard to argue the issue was personnel: the Timberwolves — in a battle to pull out of the play-in tournament and determined to avoid losing their third straight game — simply played a lot harder.

Whether it was Jarred Vanderbilt beating everyone to the rim for a dunk while Toronto’s defence was standing still, outhustling the Raptors to keep a possession alive with an offensive rebound, Jordan McLaughlin hounding Trent Jr. for 90 feet and eventually forcing a turnover or Timberwolves star Karl-Anthony Towns hustling across the floor to draw a charge on Precious Achiuwa, Minnesota was working harder and getting more out of it.

It carried over into the second quarter as the visitors went up by 17 on a DeAngelo Russell three with just over two minutes played.

Minnesota was playing to the identity shaped by head coach Chris Finch, who was on the Raptors staff in Tampa last year before leaving to take the Minnesota job. Finch has a long history coaching with and against Nurse and a broadly shared philosophy which is represented in each of their team’s propensity to crash the offensive glass, force turnovers and try to play in transition offensively when the opportunity presents.

“I think we are both kind of came from a background where possessions mattered a lot. How you generate as many possessions as possible in a game whether that’s pace, offensive rebounding, two for one’s, all the little pieces of the game that you can kind of get this little advantage. Certainly, if you are able to create turnovers out of your defence that’s another way because it often leads to pace as well. So yeah I think it’s just been rooted in how we have always liked to play.”

The Raptors finally started playing to their identity early in the second quarter. Suddenly they were drawing charges, swarming on defence and forcing misses and turnovers as they held Minnesota to just 11-of-25 shooting. Meanwhile, the Raptors pushed the pace and were rewarded with a flurry of open looks from three and transition chances. Achiuwa and Anunoby combined to go 6-of-9 from deep as Toronto led Minnesota 12-2 in fastbreak points. It was all part of a 39-20 surge that gave Toronto a 62-60 lead at half after VanVleet hit a buzzer beating triple on a fantastic pass by Siakam, who had four assists in the quarter on his way to his triple-double.

The Raptors are healthy and they’re rolling — an ideal situation as the playoffs come firmly into view. What will be interesting from here is if Nurse decides to juggle his lineup with a full complement of options at his disposal.