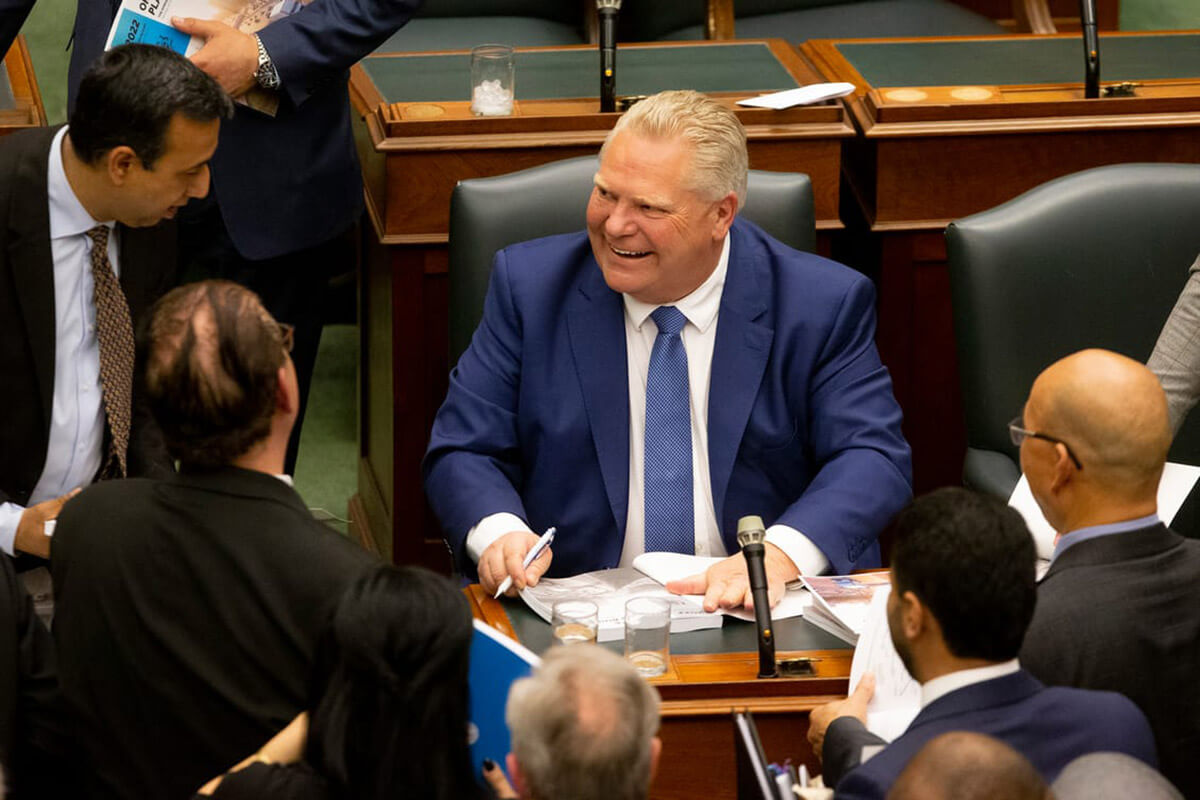 This past week the Ford government tabled a provincial budget that was a pre-election giveaway as far as this writer is concerned. The budget resembled an NDP-type rollout and a basket of all the candy and promised even sweeter goodies to come. The Ford government released the 2022 budget detailing its spending plans if re-elected to another term in June. Much of the budget rehashed commitments the government made in recent months, including a planned 50% increase to the minimum wage in October.

This budget was titled” Ontario’s Plan to Build”, presented by Finance Minister Peter Bethlenfalvy focuses on driving economic recovery from the COVID-19 pandemic by investing in the construction of highways, transit infrastructure and hospitals. The usually used buzz words meant to get folks excited and on edge that we are going to get more if we reelect this progressive conservative Ford government. Let me give you a simple review of what Ford has proposed and hopes that we all buy into.

This government is proposing to introduce and expand tax credits, but the budget doesn’t act on Ford’s 2018 election campaign promise to cut income taxes by 20%. Instead, the low-income individuals and families tax credit is being expanded to support residents making an annual income up to $50,000. Eligibility was previously capped at $38,500. This is expected to cost 320 million a year and support an additional 700,000 people, with an average tax savings of $430. Also being proposed is a new tax credit to help seniors 70 and older pay for medical expenses. Under the new Ontario Seniors Care at Home Tax Credit, eligible recipients would receive up tp 25% of their medical expenses for a maximum credit of $1,500.

Building roads and transportation infrastructure are a key priority in the government’s capital plan, while trying to keep infrastructure moving as it’s key pilar in this government’s reelection bid. This government reiterated in the budget its plans to build or expand highways at a cost of twenty-five billion over 10 years. This includes an added investment of four billion from what was earmarked last year. Cost details weren’t provided for individual projects such as Highway 413 and the Bradford Bypass, two contentious planned routes that the government is expected to make a priority. Other commuter-focused projects given the green light include starting work on widening Highway 401 between Oshawa and Port Hope and the QEW Garden City Skyway rehabilitation project, including a new bridge over the Welland Canal connecting St. Catharines to Niagara-on-the-lake.

The Ford government plans to boost spending on health care infrastructure by ten billion over the next 10 years, adding to the thirty billion previously budgeted. These spending measures are intended to address problems the pandemic has exposed by increasing hospital capacity with 3000 additional beds across the province. Also, in an effort to retain nurses, the province would also spend over 800 million over two years to provide nurses with a $5,000 retention bonus. For residents needing health care at home, the province is also providing one billion to expand the home-care system.

This budget doubled down on some previously announced policy initiatives aimed at easing the labour shortage and boosting the pay of low-income workers but did little to significantly and immediately address the impact of high inflation . This budget focused on pumping about one billion annually into a range of provincially run agencies and programs geared toward restraining workers, getting more people interested in the skilled trades and addressing the skills gap. This government will invest an additional one hundred million over three years in its Skills Trade Strategy program, which among other things, provides financial support for those who enroll in apprenticeship programs at local colleges.

A new-found emphasis by Ford’s government on building or attracting industry related to cleanenergy transition. That includes a critical minerals strategy released in March, with a focus on electric-vehicle components and a commitment of 29 million in exploration and innovation funding, atop larger sums promised for related infrastructure. A new strategy to make lowcarbon hydrogen, including an electricity rate cut for a major production facility in Niagara Falls.

This budget also includes many hundreds of millions of dollars in subsidies, alongside the federal government, to land electric-vehicle manufacturing commitments from major automakers. This budget also mentions the idea of creating Ontario’s first provincial park in 40 years, but no mention of costs and where…. Hmmm

This government said it will launch a pilot project with school boards to expedite construction of schools. Previously announced, the government’s budget included 14 billion in capital grants for schools over the next 10 years, which includes 1.4 billion in 2022-23 to address the repairs backlog.

This pre-election budget is totally laced with goodies that will tempt you to vote for Doug Ford and his conservative government. From my perspective, this budget is full of hot air with no one responsible is talking for explaining who will be paying for these sweets….

A no nothing federal budget…

The latest conflict in the Middle East

The meaning behind words