Economists had been expecting the rate to come in at 7.3 per cent, after inflation rose to a 40-year high of 8.1 per cent earlier this summer.

Instead, the rate fell by even more than expected, in large part because gasoline got much cheaper during the month.

Gas prices fell by 9.6 per cent in August from where they were the previous month. That is the biggest one-month drop in gasoline prices since April 2020, when the pandemic was just beginning.

While gasoline got a little cheaper, food prices continued their increase — the cost of groceries has risen by 10.8 per cent in the past year.

That’s the fastest increase in the typical grocery bill since 1981.

“The supply of food continued to be impacted by multiple factors, including extreme weather, higher input costs, Russia’s invasion of Ukraine and supply chain disruptions,” the data agency said.

The decline in the inflation rate will come as a relief to the Bank of Canada, which has been aggressively raising its benchmark interest rates trying to cool things down.

But even at 7 per cent, the official inflation rate is still more than twice as high as the central bank likes to see.

Beneath the headline number decline, there were more encouraging signs that underlying inflation may be starting to ease. So-called core inflation — which strips out volatile items like food and energy — fell to 5.2 per cent, down from 5.4 per cent the previous month.

Leslie Preston, an economist with TD Bank, says there are reasons to hope that inflation may be behind us.

“A journey of a thousand miles starts with a single step,” she said. “Canadian inflation took a single step in the right direction in August, but it still has a long way to go.” 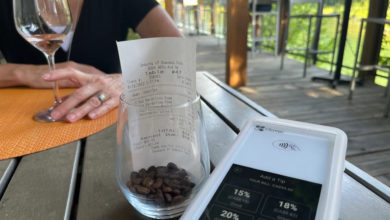