Canada’s border agency is stepping up efforts to deport failed refugee claimants and other foreign nationals not welcome in this country, setting a goal of dramatically increasing deportation numbers by up to 35 per cent.

An email from the director of Canada Border Services Agency’s Enforcement and Intelligence Operations Division, sent Oct. 17 and obtained by CBC News, outlines the plan to ramp up removals to 10,000 people a year.

“Over the last few weeks I have been involved in several discussions both regionally and nationally concerning the Government of Canada’s decision to substantially increase removal efforts including the re-establishment of national and regional targets, a practice many of you may still remember,” Brad Wozny wrote to staff.

“Initial discussions have the agency working towards a new national target of 10,000 removals/year. This would imply about a 25-35 per cent increase over the last couple years.”

CBSA confirmed it has set a national goal of 10,000 removals a year.

Agency spokesperson Barre Campbell said Canada remains an open and welcoming place for people seeking refuge and will continue to treat them fairly and with compassion while expediting removals.

“To ensure that the CBSA is meeting its mandate under the Immigration and Refugee Protection Act to conduct removals as soon as possible, the agency is focused on increasing overall removal numbers for the current fiscal year and beyond,” said Campbell in an email.

There are 18,000 cases now in the deportation inventory, most of them failed refugee claimants. Delays in the process can be caused by appeals and legal proceedings, court sentences, a temporary suspension of removals, a lack of valid travel documents, medical issues, or an eligible claimant’s application for a Pre-Removal Risk Assessment (PRRA), Campbell said.

He said there are now about 5,300 “actionable cases” with no known impediment to deportation. 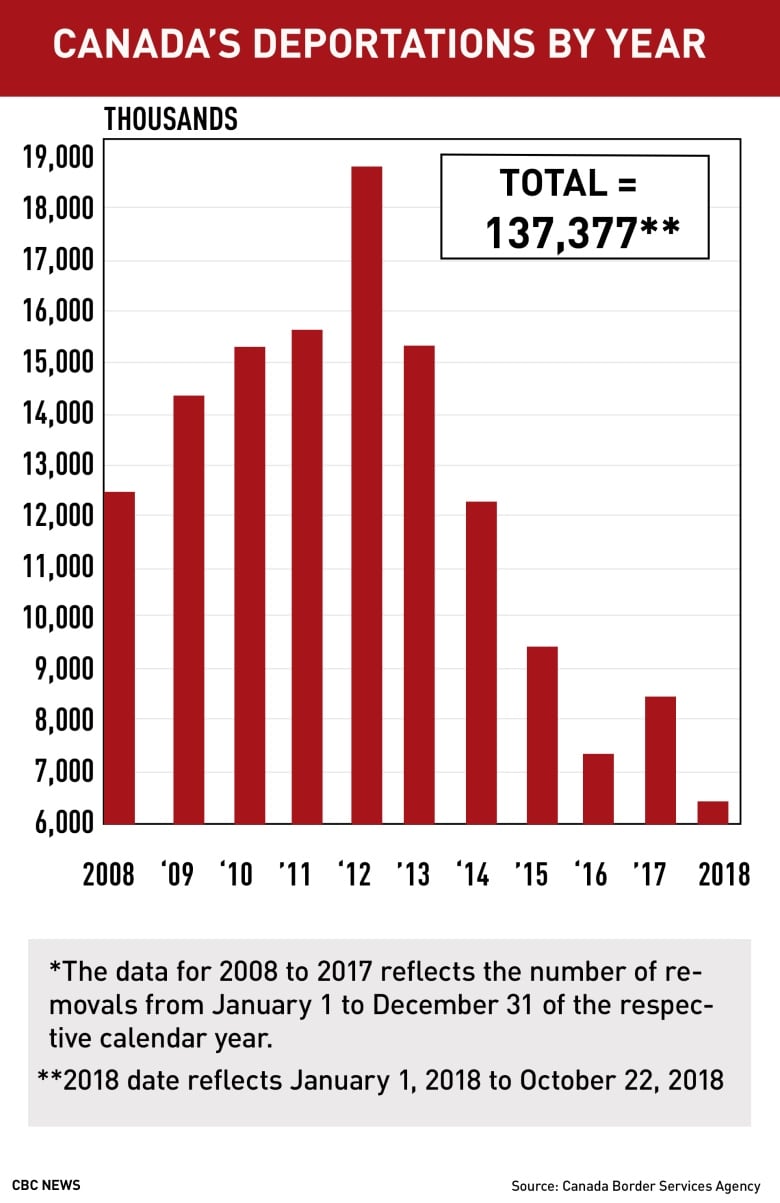 “While Canada is a humanitarian country that has welcomed many immigrants and asylum seekers over the years, those coming to our country are expected to abide by our laws and processes,” Campbell said. “As these individuals are processed through the asylum system, those whose claims are not eligible are required to leave Canada or be removed.”

The move to increase removals comes as asylum seekers continue to stream into Canada from outside regular border points.

In May, officials said that of the 68,000 asylum seekers who had entered Canada since the beginning of 2017, less than one per cent had been removed from the country — even though a high percentage had been deemed ineligible to stay.

At the time, Public Safety Minister Ralph Goodale said it was too early in the process to expect large numbers of asylum seekers to become subject to removal orders, but added it’s important to speed up the entire determination, appeals and removal process.

Today, Goodale said the CBSA is doing its part.

“We’ve indicated that we have to pick up the pace in terms of that activity, and we’ve provided some extra resources for CBSA to do the work that is necessary,” he said.

This year’s budget allocated an extra $7.5 million to CBSA to ensure that once a rejected refugee claimant has exhausted all legal avenues of appeal, and all administrative requirements are met, he or she can be promptly removed.

Conservative immigration critic Michelle Rempel said the government has failed to stem the flow of people illegally crossing in to Canada outside of official border points, leading to excessive pressure on the system. The government also has failed to remove those deemed ineligible in a timely way, she said.

“This shows the lack of seriousness that the government has in terms of this broader issue as well as the lack of a plan,” she said. “So without seeing any sort of concrete plan to reduce demand on the system, as well as how it would be executed, I would say that this is lofty thinking rather than anything sort of real.”

Janet Dench, executive director of the Canadian Council for Refugees, said it should be expected that as the number of asylum seekers climbs, the number of removals also would increase. But she said arbitrary targets set in past have led to removal orders that did not take into account compelling humanitarian factors.

“I think that the risk is that we’re going to be seeing more stories in the media of individuals and families where many Canadians would say, ‘Well, this doesn’t make sense, why would we be deporting these people given their individual fact circumstances?’ And yet, that’s very likely to happen,” she said.

The CBSA says it sets priorities for removals. Cases involving national security, organized crime, crimes against humanity and other criminal acts — and failed refugee claimants who arrived irregularly — get top priority. Other failed refugee claimants get secondary priority for removal, followed by anyone else deemed inadmissible, including those who have overstayed travel, work or student visas.

Dench said that under a quota system, border officials tend to focus on the “easiest” removals — such as families and failed refugee claimants — and set aside more challenging cases, such as people with criminal records, because they tend to require more officers to handle each case.

“They get (lower) numbers for the same number of officers,” she said. “So it can distort where the priorities go, in terms of removals, and maybe leads to priorities being different from what most Canadians would consider should be the top priorities.”

Ntebo Ebenezer Awungafac, a human rights activist from Cameroon, has been deemed inadmissible to Canada and now fears deportation. He was affiliated with an anglophone minority rights group that had a splinter that advocated violent resistance, but insisted he was never involved with that wing.

Awungafac said he remains optimistic that Canada will let him stay, and his lawyer is exploring all legal avenues.

“I fear with the work I was doing back home, if I’m going back now with the warrant of arrest I have back home, I will not be alive,” he said.

The email from Wozny said the CBSA also is working on an action plan to improve data integrity and the accuracy of information in the removal system, with updates on arrests, the outcome of hearings and clients who left Canada voluntarily or received status.

A poll released by the Angus Reid Institute in August suggested two-thirds of Canadians believe the influx of asylum seekers into Canada is a “crisis,” and that could have political repercussions for the Liberal government and Prime Minister Justin Trudeau.

Another survey by the same firm made public later that month indicated about half of those surveyed want to see the number of immigrants coming to Canada lowered.

The Angus Reid Institute found 49 per cent of Canadians want to see the federal government’s 2018 target of 310,000 immigrants reduced. In 2014, 36 per cent said it should be reduced.