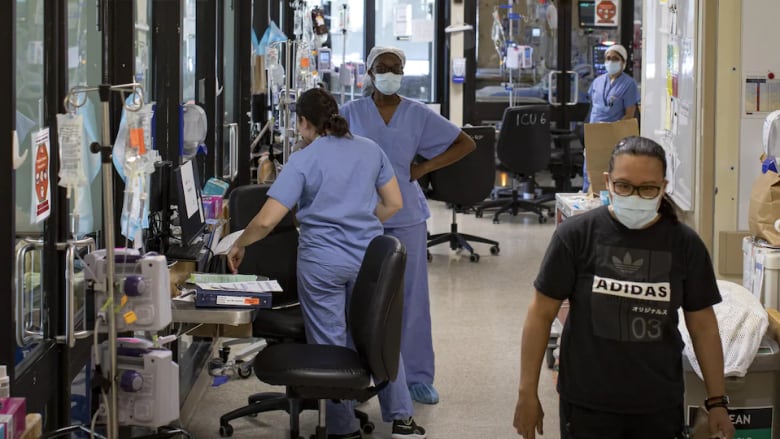 It’s a new year, but Quebec’s emergency rooms are still dealing with the same problems.

Overcrowding, staffing shortages and sicker patients have been crippling emergency rooms across the province for months.

Following a period of holiday celebrations — the first in three years without strict public health rules — health-care workers say the situation will worsen before it improves.

“We would like to be wrong, but unfortunately, we’ve got to prepare for the worst,” said Dr. Judy Morris, head of the Quebec Association of Emergency Physicians.

But with most hospitals across the province already operating at more than 100 per cent capacity — and new variants of COVID-19 adding to that list of viruses — she fears the looming surge could break the short-staffed health-care system.

On Tuesday morning, Montreal’s Lakeshore General Hospital emergency room was operating at 210 per cent capacity — not an uncommon occurrence these days, according to ER nurse Nathan Friedland.

“I would call it a disaster,” said Friedland of the situation at the West Island hospital.

He said patients are showing up even sicker than usual due to backlogs in primary care throughout the pandemic.

“It’s going to get a hell of a lot worse before it gets better.”

As of Tuesday morning, the average occupancy rate in emergency rooms across Montreal was 133 per cent — it was 126 per cent across Quebec.

But Friedland said the figures don’t represent the number of people waiting to be triaged.

“If you don’t get a stretcher, you go back to the waiting room and you’re not on the count,” he said.

In October, the Quebec government established a crisis unit to help manage the overflow of patients in emergency rooms. Following the unit’s recommendations, the Health Ministry put in place some new measures, including opening five clinics run by nurse practitioners and expanding the 811 Info Santé line for pediatric services provincewide.

While health-care workers say these measures will help with waiting room traffic, they won’t necessarily alleviate overcapacity on stretchers.

“Those are patients that are sick enough to need an emergency room and 811 cannot help those people,” said Friedland.

Dr. Cristian Toarta, the associate emergency department chief at the McGill University Health Centre, said an ideal solution would be more hospital beds. Without them, emergency room nurses are being forced to look after people on stretchers who would otherwise be up on a floor being taken care of by ward nurses.

“Everybody’s busy, it’s just the [backlog] always happens through the emergency department so that’s why it may take longer for our nurses to come see you, to give you pain medication, why the physician may have more trouble seeing you … it’s often hard when we’re dealing with hallway medicine,” he said.

The Health Ministry’s crisis unit also released an overcapacity plan, which included a list of directives to be adopted by hospitals, back in early December.

Similar to Toarta’s proposed solution, one of the directives involved redistributing the pressures on hospitals’ ERs and their wards — having those wards accommodate more patients. Another stratgey involved having better and more timely access to radiology and consultations, including extending hours of availability.

Morris says putting “a little bit of pressure on the wards” will make a big difference for the ERs, but she says the question remains whether hospitals will actually implement these recommendations.

“We need hospitals and the whole health-care system pretty much to come together and work on a plan to help us out,” she said.