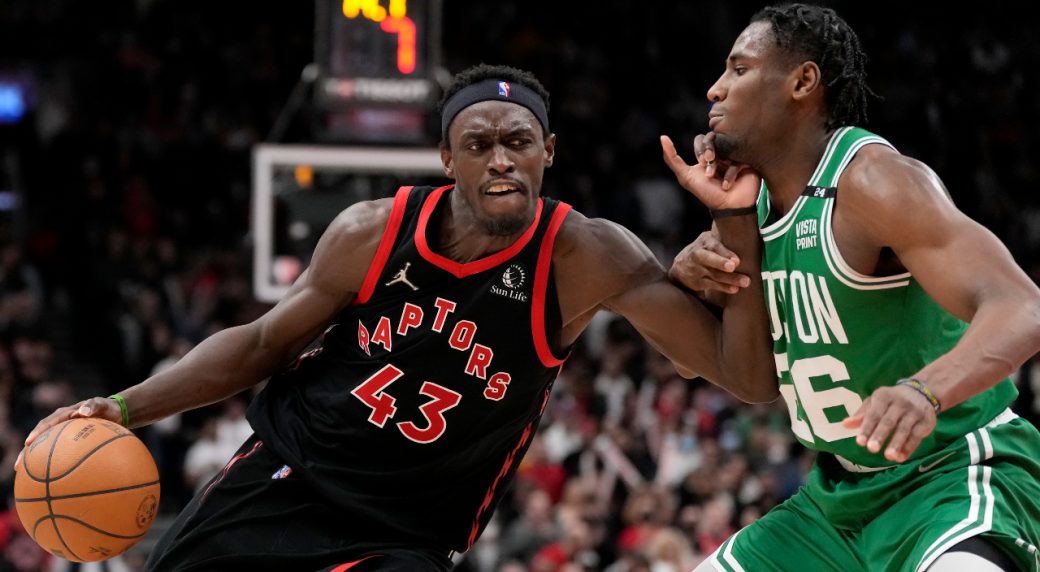 Nick Nurse has insisted he’s not watching what other teams are doing in a tightly packed Eastern Conference and only a handful of games left in the regular season.

But the Toronto Raptors coach was intrigued moment’s after his team edged the Boston Celtics 115-113 in overtime Monday in Toronto.

“I heard that [Chicago] lost. What’s that mean? We’re tied for fifth?” Nurse asked reporters. “And how many out of first? Three and a half [games]? Geez, that’s pretty close. It’s pretty close to first place. That’s cool.”

Pascal Siakam had a season-high 40 points and 13 rebounds and the Raptors ended the undermanned Celtics’ win streak at six games, and vaulted themselves into a tie with the Bulls for fifth, one game ahead of Cleveland.

“That was a tough, tough game to play and I think we certainly could have went either way and we’ve been on the wrong end of some of those,” Nurse said of the rough-and-tumble affair. “You feel really crappy at the end of them when you end up on the wrong side of `em, so it’s nice that we got one of these kind of ugly grind-out, don’t really know what the hell’s going on out there, Ws.”

Fred VanVleet and OG Anunoby scored 14 points apiece, while Gary Trent Jr. and Thaddeus Young finished with 12 apiece, and Scottie Barnes chipped in with 10 for the Raptors (43-32), winners of nine of their last 11 games.

With seven regular-season games left, the Raptors are gunning for a top-six finish which would mean going straight to the post-season and avoiding play-in games.

The Celtics fell a game behind Miami for first in the East. Philadelphia and Milwaukee are also one game behind the Heat but both have played two fewer games than Boston and Miami.

The Raptors trailed by 11 points in the first quarter, finally took their first lead late in the second, and paced the Celtics basket for basket though a third quarter that saw neither team lead by more than three points. The score was tied 80-80 through three quarters before a capacity crowd of 19,800 that included Canada’s World Cup-bound men’s soccer team.

Payton Pritchard’s three-pointer early in the fourth had Boston up by seven, but Young replied with five straight points and VanVleet knocked down back-to-back threes, to ear-splitting cheers from the crowd, and it was a one-point game with 3:08 to play.

Trailing by four with a minute to play, Siakam drove to the hoop to slice the difference to two, then grabbed a defensive rebound and was fouled with 12.6 seconds left. He made both to tie it up and send the game to OT tied 106-106.

“The way they were guarding me there wasn’t much pressure so I had a head of steam to get to the rim and those baskets, those touch baskets that I usually have, they fell, which helped,” Siakam said. “It depends on how they’re playing me and I felt like I had an advantage and it helps if there’s no help.”

Trailing by four in the extra period, Anunoby connected from long distance, then Siakam scored on consecutive baskets for a three-point Raptors lead with 1:47 to play.

The Celtics, who lost for just the third time in 25 games, were missing Jaylen Brown, Jason Tatum, Al Horford and Robert Williams III.

“Great night by a lot of guys,” Celtics coach Ime Udoka said. “A lot of guys stepped up. We had our chances and felt we should have won.”

Smart had two of Boston’s six three-pointers in the first quarter Monday, his second one putting the Celtics up by 11 points midway through the frame. Boston led 38-30 to star the second.

The Raptors outscored the Celtics 29-20 in an entertaining second that saw a flurry of seven steals. Anunoby’s steal and dunk saw Toronto take its first lead, 48-47, with 3:26 left in the first half. Siakam had a steal and basket on Toronto’s next possession for a three-point lead.

With three seconds left in the half, VanVleet swiped the ball off Pritchard and was fouled for a three-point play. The Raptors went into halftime up 59-58.

Canada’s men’s soccer team earned a standing ovation during a time out, taking centre court during a tribute to the team a day after clinching the country’s first World Cup berth since 1986 with a 4-0 victory over Jamaica at Toronto’s BMO Field.

“Congratulations to those guys,” said Nurse, who also coaches Canada’s men’s basketball team. “It was really a long wait, a long haul, and they’ve been tremendous through this whole thing.”

To Qatar we go! @CanadaSoccerEN

Asked if the passion can transfer between national teams, Nurse said “I think hopefully the specialness they see is intriguing, being able to accomplish things on a national team front, from sport to sport.”

The Raptors host Minnesota on Wednesday then head to Orlando for the first of just two remaining road games on their regular season. The other is their season finale at New York on April 10.