Canada put on a show Sunday, qualifying for the men’s World Cup for the first time since 1986.

Cyle Larin, Tajon Buchanan and Junior Hoilett scored as the Canadians had their way with an outmatched Jamaica side in a 4-0 win before a loud and proud sellout crowd of 29,122 on a chilly day at BMO Field. A Jamaican own goal in the 89th minute padded the score.

And the margin of victory could have been far more lopsided.

Canada (8-1-4, 28 points in the final CONCACAF qualifying round) dominated from the get-go, stacking scoring chances like firewood. The home side was up 1-0 after 13 minutes and 2-0 at the break. It could have been 4-0 midway through the first half when the sun made its first appearance.

Jamaica (1-7-5, eight points) spent the afternoon in reverse. The game was done and dusted after the first half.

The historic win came 37 years after Canada qualified for the 1986 World Cup in Mexico with a 1-0 victory over Honduras on Sept. 14, 1985, in St. John’s, N.L. That marked the Canadian men’s lone trip to the soccer showcase, where they lost all three games without scoring a goal.

Canada soccer has been on a high with the sixth-ranked Canadian women winning gold last summer at the Tokyo Olympics. Now the 33rd-ranked men, led by coach John Herdman, get their time to shine in Qatar, while lengthening their runway to the 2026 World Cup, which Canada is co-hosting with the U.S., and Mexico.

The Canadian men, who lead the eight-country final round-robin, also had a chance to seal qualification on Thursday in Costa Rica but lost 1-0 after playing two-thirds of the game with 10 men in the wake of Mark-Anthony Kaye’s red card.

It marked the lone blemish on their qualifying road. Going into Sunday’s match, Canada had outscored its opposition 50-7 while posting 11 clean sheets in 18 qualifying games over three rounds (13-1-4).

On a cold day, Canada came out hot and was rewarded for its dominance in the 13th minute when, after a lightning-fast counterattack, Hoilett squared the ball to Stephen Eustáquio who threaded the needle to put Larin behind the defence. The Besiktas forward calmly slotted the ball past goalkeeper Andre Blake for his 24th goal for Canada, extending his national men’s scoring record.

Buchanan made it 2-0 in the 44th minute as Jamaica failed to deal with a free kick that the Club Brugge winger had earned after being chopped down in the midst of several stepovers. A defender headed Eustáquio’s free kick away but it went straight to Jonathan David, whose cross dropped at Buchanan’s feet in front of goal.

He celebrated the goal with his trademark backflip.

Hoilett made it 3-0 in the 83rd after Buchanan nicked the ball off a defender following a corner and fed the veteran Hoilett, who slashed through the penalty box and beat Blake for his 14th goal for Canada.

Adrian Mariappa’s failed attempt at a clearance off a Sam Adegukbe cross ended up in the Jamaican goal to make it 4-0.

Canada was without Kaye, suspended after being sent off for two yellows in Costa Rica.

In later games Sunday, it was Costa Rica at El Salvador, Panama at the U.S. and Mexico at Honduras.

The Canadians, who wrap up qualifying Wednesday in Panama, only needed a draw Sunday to qualify. Other qualification routes were if Costa Rica failed to win or a Panama victory over the U.S.

The top three teams qualify for Qatar as representatives of North and Central America and the Caribbean while the fourth-place finisher takes on an Oceania side in an intercontinental playoff to see who joins them. 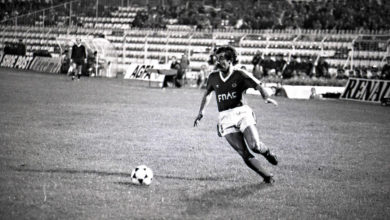