Prime Minister Justin Trudeau vowed in the last weeks to do more to end anti-black racism in Canada after days of massive street protests in U.S. and Canadian cities against police brutality. 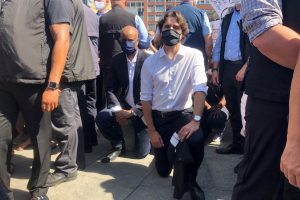 Trudeau said racism is not a uniquely American problem and more must be done in Canada to address systemic inequalities that have long plagued black and Indigenous communities.

“We need to be better in Canada. Even though we’ve made strides forward in the fight against racism and discrimination, racism still exists in Canada,” he said. “To young black Canadians, I hear you when you say you are anxious and angry.”

He said his government has funded black community groups, supported anti-racism programming and bolstered the collection of racial data at Statistics Canada to fight against discrimination, but he promised to do more. Last Friday (5) Prime Minister Justin Trudeau attended to an anti-black racism rally in Ottawa with the Minister of Families, Children and Social Development, Ahmed Hussen.

Conservative Leader Andrew Scheer said that Canadians have a right to be angered by the sight of Prime Minister Justin Trudeau attending a protest after months of promoting stay-at-home orders as the best way to beat the pandemic. However, the Ministry of Families, Children and Social Development underlines to Milénio Stadium that the government “will always support Canadians’ right to peaceful protest and freedom of expression, while working to keep everyone safe”.

Milénio Stadium: You came to Canada as a refugee, based on your personal experience, there is systemic racism in Canada?

Minister of Families, Children and Social Development: Black communities in Canada, the U.S., and around the world continue to experience anti-Black racism and frankly, far too often. We know people are facing systemic discrimination, unconscious bias, and anti-Black racism every single day. As a society we need to stand together, stand up against discrimination, be there for each other in respect. If we truly desire an inclusive Canada, the rest of us must step up, be allies, and do what we can to make workplaces, communities, and public spaces safer.

MS: Last Friday (5) you attended to an anti-racism protest on Parliament Hill with the PM Justin Trudeau and both of you joined the large crowd in kneeling for eight minutes and 46 seconds. Why it was so important to be present on that protest?

Minister of Families: We condemn anti-Black racism. We condemn systemic discrimination. In the face of injustice, we can never remain silent. We can’t pretend that racism doesn’t exist in Canada. Anti-black racism is real. Unconscious bias is real. Systemic discrimination is real. We will always support Canadians’ right to peaceful protest and freedom of expression, while working to keep everyone safe.

MS: Why are Black Torontonians 20 times more likely to be shot by police than the city’s white residents?

Minister of Families: We believe that every Canadian is entitled to bias-free and culturally competent policing. Black Canadians and other racialized communities still face systemic barriers in Canada. We will continue to bring real consequences for members who break the law and show bias in their policing to ensure we do right by our communities. There is a lot more work to do, and our government is continuing to work with agencies, expert stakeholders and individuals with lived experience of racism to make the RCMP a more just and diverse agency.

MS: The PM said this week that he is planning to push provincial premiers to equip police with body-worn cameras as a rapid, substantive solution to allegations of racism and brutality. Are you confident that this measure will work or is just a bandage?

Minister of Families: Protecting the safety and security of Canadians, and ensuring public trust in our forces, are top priorities for our government. As Commissioner Brenda Lucki said it is critically important for Canadians to feel protected by the police. Moving forward, the RCMP has committed to work with policing partners on a broader rollout of body-worn cameras. This is one of the many steps we will take to ensure the safety of all Canadians.

MS: The distribution of COVID-19 cases in large cities such as Toronto and Montreal shows that Black people have been disproportionately hit by the pandemic. Why is this happening and what can be the government role?

Minister of Families: Our Government is working, in collaboration with the provinces and partners from across society, on improved data sharing and collection. In 2018, we created a new Statistics Canada Centre for Gender, Diversity and Inclusion Statistics. Statistics Canada is receiving funding as part of our Anti-Racism Strategy to allow for more disaggregated data and more targeted policy analysis with respect to the experiences of some ethno-cultural groups in areas across Canada. Those are just some examples of the work we are doing to improve disaggregated data gathering and we will continue to do this important work.