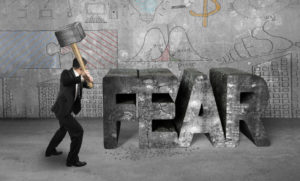 Fear is that most primal of all our emotions, or instincts.  In humans, it can be both a blessing and a curse, but it’s an important part of every one of nature’s creatures, as an instrument of survival.  There are those who welcome fear, those who allow it to guide their lives and everyone in between.  For these reasons, it’s been used to control us for as long as civilization has existed.  Obviously, it’s also a much favoured political weapon.  Since we’ve been indoctrinated from childhood, (don’t do this or that for fear of the consequences), it’s relatively simple to scare many people for the purpose of swaying them in a certain direction.

Not to say that I’m braver than others, but fear has never really been a controlling factor in my life.  Remembering the decades of the cold war, both the media and friends expressed concern over possible nuclear war, but my instinct dictated to me that no one in their right mind wanted to cease to exist, so I was certain that the likelihood of the occurrence of such a catastrophic event would be extremely low.  Today, I’ve become concerned, at times fearful and that, in itself, scares me.  I’ve always resisted the temptation and now, it has manifested itself.  It’s not because of the threat of a war we can’t come back from, but nature’s threat.  Nature is not as predictable as people are.  The crimes we have committed and continue to commit against it are having a profound negative effect on the very system that put us here in the first place.  It is, in fact, mother nature, after all.  It’s of no use hiding under the bed or climbing to the highest peak.  It’s all around us- it is us.  All the tweaking we’ve been doing, especially over the last couple of hundred years is showing and it’s scary.  We have no quick fix.

All the possible reversals in behaviour or repairs will take decades to implement and that’s assuming we are all on board and we know how difficult that is.  So yes, I’m afraid.  I still have a few good years in me.  I want to see my children into the future.  I want to be a grandfather and I also want all of these things for them.  The speed at which the elements are changing is staggering, even much quicker than science predicted.  We seem to be at a point where we don’t have a clue what the next season will bring.  That is something to fear, but fear can be a good thing, if we know how to use it.

We need to use this fear to shake us out of this complacency, this comfort zone we so work for.  We need to remember that our comfort zone is relative and we need to adapt it to the times.  The late George Carlin put it best when he alluded to the fact that it’s not the planet that needs to be saved.  The Earth will be just fine, we’re the ones that are in danger.  When the time comes, the planet will just shake us off like a dog rinsing off after a bath.  The only upside I see is that if we eventually do get “shaken off” the planet, whatever simple life forms that remain might evolve somewhat more aware than their predecessors.

Who do we think we are?  Will someone come up with a magic potion to fix this mess?  That’s what we seem to be waiting for.  It must be from all these generations growing up as drones, having everything done for us-for a price.  Now, no money in the world is going to solve this. It’s actually up to all of us, collectively and that’s what really hits home.  Scary, isn’t it?