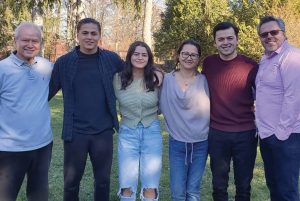 Milénio Stadium: Given the fact you are from different ethnicity and cultural backgrounds; did it create any doubt at the start of your relationship?

Tino DosSantos: For me personally I never had any doubts or concerns about dating Jamie because of the fact she was from Hong Kong. My own life journey, experiences, environment, have enabled me to grow into an adult who has learned to see other people as “human beings” first before their ethnicity or cultural background. That said, I was very aware that my family would see Jamie through their own eyes, their upbringing, life experiences, beliefs, unconscious or conscious biases and not necessarily through my own eyes.

Jamie DosSantos: Not at all. Although both my parents were born and raised in Hong Kong, they were both children of mixed racial marriages. My mother was mainly of Chinese/British descent and my father of Malaysian/Chinese descent. Matter of fact Hong Kong is a very diverse culture.

MS: You both have a passion for the same sport. Do you believe this played a crucial role in uniting both worlds?

TDS: Yes, we actually met after making the Canadian National Taekwondo Team in 1989.  Jamie was the female team captain and I was the male team captain.  This was the start of our friendship and eventually our relationship.

Although the sport brought us together, it did not necessarily unite our ethnic and cultural differences. That said, I do believe our common interest in the sport combined with the fact our sport attracted athletes/participants from such a wide variety of different ethnic, religious and cultural backgrounds, enabled us to develop greater levels of awareness, tolerance, respect and appreciation for diversity and inclusion.

JDS:  We wouldn’t have met if it wasn’t for TKD, so yes, very crucial.

TDS: Absolutely. I love to celebrate cultural differences and take great pride in the fact our beautiful children also have the same passion and appreciation. The most common is food. As a family we love Portuguese food, Chinese Food and many more types of Asian food. Our family loves traditional Cod Fish dishes as well as many of our fish and seafood dishes. Same goes for traditional Chinese dishes, such as Duck, Lobster, Crab and Seafood Noodle dishes. 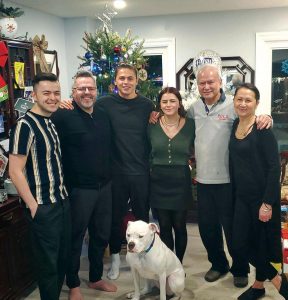 Most of the holiday celebrations we do as a family are aligned to Portuguese traditions because of the presence of my large Portuguese family here in Canada.  We all get together for many of the traditional holidays, anniversaries, birthdays, etc., and we celebrate with great food, wine, and music. On the other hand, Jamie’s only direct family here in Canada is her dad, who has lived with us for the past 20 years. The most common celebration we do together that’s aligned to her heritage is Chinese New Year.

JDS: We celebrate like the Portuguese for Easter, Christmas and New Year. Our biggest yearly celebration is Chinese New Year (typically in February) – the main focus of how we celebrate all these cultural events or holidays is always through lots of great traditional food.

MS: Tino comes from a Catholic family and upbringing but is an atheist. Jamie comes from a Muslim religion but not a practicing Muslim.  When you started dating was this already the case or did you move away from religion in order to have more harmony in your relationship?

TDS: Religion played a huge part in my upbringing and who I am today. The values my parents taught me were predominantly based on our Catholic upbringing and I’m grateful to my parents for the way they raised me and my siblings and the values they taught us.

As I grew older and entered adulthood, religion became less prominent in my life. By the time I met Jamie I considered myself an atheist but still had, and to this day, have respect for all other religious beliefs. I respected the fact Jamie was born into a Muslin family and was a non-practicing Muslim.  For me personally religion was never a factor in who I dated or who I would end up marrying someday.

MS: In relation to your children, do you think they are a byproduct of either cultures or more from one culture over the other culture?

TDS: Absolutely they have deep roots of both cultures. That said, due to the fact they were raised in Canada, my immediate Portuguese family have always been a significant presence in their lives and they grew up in very close relationships with their Portuguese cousins, I strongly believe our children relate to Portuguese culture more than Chinese.

JDS: Absolutely both!  They are probably more Portuguese than Chinese, because we are a very close knit family, especially because all the kids (cousins) are very close in age and grew up spending weekends and summers together. Tino is very close to his siblings, we spent a lot of time together.  We also want our kids to grow as a strong family unit.

MS: English is your common language. What is left or still used of your first language?

TDS: I still speak Portuguese primarily when I’m with my 3 eldest siblings, my aunts and uncles.   Jamie still speaks Chinese (Cantonese) regularly at home because we’ve been fortunate that her father has lived with us for the past 20 years. That said, they speak minimal Chinese because her father is fluent in English.

We never taught our children either Portuguese and/or Chinese (Cantonese) and this is something that in hindsight we now regret and our children have made it clear to us they wish we had taught them either language or both.

JDS: I speak Cantonese with my family (older generation), I prefer English cause my Chinese is not very strong.

MS: At any time in your relationship did you ever feel or experience any type of discrimination for having a partner of a different ethnic culture?

TDS: Yes from people who unfortunately were raised in an environment of less tolerance, but in my humble opinion, mainly from lack of understanding and ignorance. I’m the first of my siblings to marry outside of our culture and Portuguese heritage and I’m so grateful my parents, siblings, aunts, uncles and entire extended family welcomed Jamie with open arms into our Portuguese family and showed her nothing but love; and as John Lennon once said “All you need is Love” and that’s what I truly believe that matters most for us as human beings.

JDS: In my opinion, everyone experiences discrimination, it’s just how you deal with it. Easy answer is I don’t care so I don’t pay attention.