This month marks the 75th anniversary of the signing of the United Nations Charter. The Charter was an important milestone in the commitment to uphold human rights of citizens and outlined a broad set of principles relating to achieving universal respect for all people and nations. 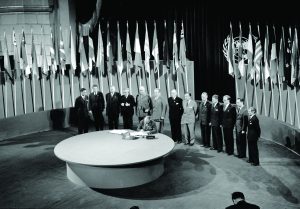 Following the Second World War, nations met in San Francisco to discuss in detail the mapping of a new world order and the creation of an international intergovernmental organization that would provide stability and avoid future conflicts from happing.  It was an ambitious project with over 50 states in attendance. The Charter has 50 original signatories. Today, the UN has grown to include 193 Member States.

On July 23, 2020, the Secretary General of the United Nations, Antonio Gutters, stated that, “ the United Nations has been a constant presence in my life…as my political awareness took shape against the backdrop of military rule in Portugal and my country’s status as a colonial power, the Charter’s calls for self-determination and other freedoms registered with urgency”.

The adoption of the Charter of the United Nations was a decisive and historic moment. Over the past seventy-five years, the Charter has proven to be a solid yet flexible framework. Its ideals have endured, and the Charter reminds us of the primacy of human dignity and the rule of law and further elaboration of international law, encompassing key areas such as human rights, the environment and international criminal justice.

Jan Smuts from South Africa originally wrote the opening lines of the Preamble  with the opening phrase “We the peoples of the United Nations determined to save succeeding generations from the scourge of war, which twice in our lifetime has brought untold sorrow to mankind, and to regain faith in fundamental human rights, in the dignity and worth of the human person, in the equal rights of men and women and of nations large and small, and to establish conditions under which justice and respect for the obligations arising from treaties and other sources of international law can be maintained, and to promote social progress and better standards of life in larger freedom”.  The opening lines echoing that of the United States Constitution. These words put people at the center and not nations.

The idea of the United Nations began to be articulated long before the end of the Second World War when U.S. President Franklin D. Roosevelt and British Prime Minister Winston Churchill signed the Atlantic Charter in 1941 which proposed a set of principles for international collaboration in maintaining peace and security.

Out of the ashes of World War II, countries came together to form an organization to serve as a platform for cooperation, dialogue, and shared action for peace. As UN Secretary-General António Guterres stated, “peace, justice, human dignity, tolerance, and solidarity are enshrined in the Charter and bind us together.”

The Charter outlined six convening bodies. These bodies include the General Assembly, Security Council, Economic and Social Council, Secretariat, and the International Court of Justice.

The Charter defines the principles on which the United Nations is based, its objectives, and sets out its functioning and structure. At the time of the formation of the UN many nations were still under colonial rule and gradually with UN assistance former colonies  achieved their independence and establish their own governments.  In addition, the UN has conducted numerous peace-keeping operations; has mediated in conflicts; and has provided vital humanitarian aid in crises. As the world body celebrate this important milestone, let us remember the important contribution and role it has played in setting international standards and norms that have smooth out international cooperation.