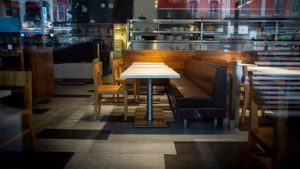 Ontario’s government has not yet announced the specific closures that will be lifted when the province enters Stage 3 of its COVID-19 reopening plan, including whether restaurants will be allowed to seat customers inside

With new coronavirus cases on a steady downward trend since early June, much of Ontario is poised to move to Stage 3 of the province’s reopening plan soon, officials suggested this week.

But it’s not yet clear which emergency restrictions will actually be lifted or relaxed when that happens.

Until now, the provincial government has described Stage 3 only in general terms: “Opening all workplaces responsibly” and “further relaxing the restrictions on public gatherings.”

This leaves plenty of open questions about precisely what Ontario’s Stage 3 will look like. How large will public gatherings be? What restrictions will remain in place for bars and restaurants? Will cinemas or theatres be allowed to open? What about gyms and other fitness facilities?

The only near-certainties about Stage 3 are: it will not bring the return of indoor events with the biggest crowds — such as concerts and spectator sports — and physical distancing guidelines will remain. Beyond those, Stage 3 restrictions could fall anywhere in a wide range.

In Ontario’s Stage 2, restaurants are restricted to outdoor seating and take-out meals. Most provinces that have allowed restaurants to reopen fully have put limits in place, such as operating at lower-than-full capacity or minimum space between tables.

Other measures could include Plexiglas between tables and having the restaurant keep a record of diners to aid public health tracing if any confirmed cases emerge among customers or staff.

“There’s only so much you can do [to prevent transmission] because of the nature of eating together,” said Sumon Chakrabarti, an infectious diseases specialist at Trillium Health Partners in Mississauga, Ont.

“There’s going to be an inherent risk. But it’s a risk that I would say is less than, say, an indoor nightclub.”

Quebec on Thursday announced new restrictions on bars in the wake of a spike in COVID-19 cases on Montreal’s South Shore. Bars are now limited to 50 per cent of their normal legal capacity, people must be in their seats to drink, dancing is banned, alcohol sales end at midnight and customers must be out the door by 1 a.m. ET.

If Ontario allows bars to have customers indoors in Stage 3, they can almost certainly expect similar restrictions, according to public health experts.

“Bars are a tough one because people go there to interact,” said Raywat Deonandan, an epidemiologist and associate professor at the University of Ottawa.

“Restaurants are a bit easier in some ways because you don’t go there to meet other people. You go there to eat with the people you came with.”

The pandemic has meant lights out for cinemas and performing arts across Ontario. The move to Stage 2 allowed the opening of drive-in cinemas, as well as performance venues where the audience stays in their cars. Sitting in seats could soon return to Ontario; cinema screenings resumed in British Columbia on July 3, with restrictions.

“The main way that this virus is spread is when you have close contact for a prolonged period of time in an enclosed space,” said Chakrabarti in an interview with CBC News.

“A movie theatre could open, but I guarantee you they’re not going to be able to have full capacity. People will be spread out.”

The closure of gyms during the pandemic has been frustrating for those who see their workout as a key way to stay healthy. They will likely be opened in Ontario’s Stage 3 but with “profound changes” to how they operate, said Deonandan.

“The services they offer will be minimal, and the number of people in any given portion of the gym will be restricted.”

While Deonandan believes pools pose little risk and weight machines can be made safe to use, spaces in which people are gathered close together and breathing heavily, such as aerobics or spin classes, could be too risky.