The City of Toronto is warning visitors to the Scarborough Bluffs to enjoy them from a safe distance.

In a tweet Tuesday, the city said rescue incidents, “require a significant number of resources that can’t be deployed to other emergencies.”

“Mind the signs/fencing when admiring the bluffs. Crossing into restricted areas/climbing the bluffs is dangerous and illegal,” the tweet said. 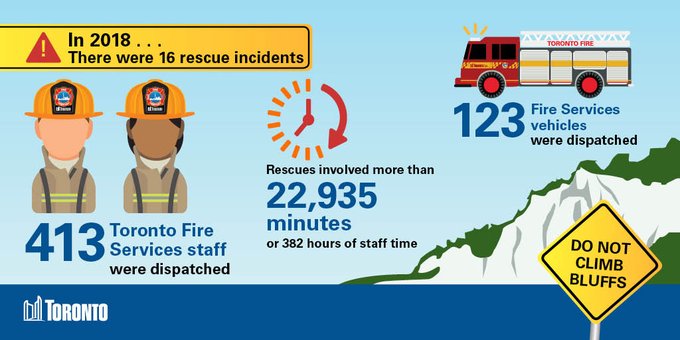 An infographic attached to the tweet pointed out that in 2018, there were 16 rescue incidents during which 413 Toronto Fire Services staff and 123 vehicles were dispatched.

Last year’s rescues used 382 hours of staff time, according to the infographic.

Fire Chief Matthew Pegg warned visitors in a tweet Sunday to see the bluffs “from a distance” after resources were deployed to another rescue at the bluffs that evening.

“Once again, @Toronto_Fire is deploying rescuers on high angle ropes to rescue people from the Scarborough bluffs. @TorontoPolice @TorontoMedics on scene as well. The bluffs are a beautiful place to see — from a safe distance,” Pegg said.

“It takes a lot of people to do it safely and properly,” said Weston.

“For some people having some fun, it does put a lot of people at risk, including the firefighters.”

The City of Toronto’s website reminds visitors to the bluffs to mind the signs and fences, and stay away from the bluffs’ edge.

“It’s frustrating, especially now that they’ve put up a whole lot of signage along the bluffs. It still happens,” said Weston.