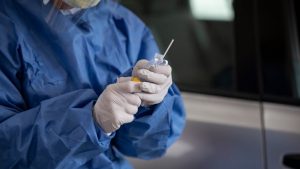 The new cases are concentrated in Toronto and the Peel, York and Windsor-Essex regions, with 23, 35, 14 and 10, respectively. Seventeen public health units reported no new cases at all.

Ontario has now seen a total of 36,464 confirmed cases of COVID-19 since the outbreak began in late January. Of those, 88.2 per cent are considered resolved by the Ministry of Health. Another 178 infections were marked resolved in today’s update.

The number of patients in Ontario hospitals with confirmed infections of the novel coronavirus also continued a downward trend, with 117 — fewer than a fifth of the total at the beginning of June. Thirty-four are being treated in intensive care units, while 24 of those are on ventilators.

Ontario’s network of about 30 community, commercial and hospital labs processed 27, 484 test samples for the novel coronavirus yesterday. Positivity rates are at ‘all-time lows’ in the province, Minister of Health Christine Elliott said today.

The province reported another seven deaths on Friday, bringing its official death toll to 2,710. But a CBC News count based on data provided directly by public health units puts the actual toll at 2,744 — an increase of two since Thursday evening.

Premier Doug Ford is set to make multiple public appearances at businesses today to thank Ontario workers for their service during the pandemic.

Ford’s day started at a skylight manufacturing company in Woodbridge, where the premier made an announcement alongside Vic Fedeli, minister of economic development.

The premier touted the near 378,000 jobs added in Ontario last month — a bounce-back largely attributed to the province reopening at the beginning of June, unlike most of the rest of the country, which began to cautiously reopen in May.

“We got through to the worst of this pandemic,” Ford said Friday.

“As we recover from the worst economic downturn of our lifetime … as we brace for what the future might hold, no more than ever we need to support our own.”

Ford said that’s the reason for the province supporting a new program called Ontario Made, launched by Canadian Manufacturers and Exporters (CME), which allows consumers to identify, access and purchase local products through a website.

“Over the past few months, plants and factories across the province retooled their operations to provide the front lines with the essential equipment needed in the fight against COVID-19, including PPE,” Fedeli said in a release issued Friday.

“[It] is now more important than ever to support and promote Ontario’s world-class manufacturing sector and get people back to work.”

The premier will then visit a bakery in Toronto’s west end to serve customers through a take out window built by the shop.

Ford’s last event is scheduled at 4 p.m., when he’ll tour a dairy and food plant that ramped up production to meet customer needs during the COVID-19 lockdown.