High-speed internet should be declared an essential service to ensure all Ontarians can enjoy the benefits of the digital economy, says the head of a group representing rural communities.

Allan Thompson, the chairman of the Rural Ontario Municipal Association, said broadband services should be treated the same as the provision of clean water, electricity, health care, education and postal services.

Making the service mandatory will bolster economic development and ensure kilometres of fibre optic cables already buried across the province by telecommunications and other private companies could be accessed for public use, said Thompson, who also serves as the mayor of Caledon, Ont.

“There are owners of a lot of fibre that’s sitting dark,” he said. “Until the province makes it an essential service it’s going to be extremely difficult to have reliable and affordable internet connectivity.”

Municipalities across Ontario have been grappling with the challenge of providing access to high speed internet and cellular service for over a decade.

The Canadian Radio-television and Telecommunications Commission has said that by the end of 2021 it wants 90 per cent of Canadian homes and businesses to have access to broadband speeds of at least 50 Mbps for downloads and 10 Mbps for uploads.

In Ontario, an estimated 12 per cent of the residents cannot access those broadband service speeds.

Setting up the right conditions for workers and businesses to relocate to rural Ontario will help lessen the burden on the province’s cities, he said.

“If you want to reduce gridlock on roads, allow people to work from home,” he said. “It’ll be far cheaper and far quicker to put fibre in the ground than to build rail service or highways.”

Both the federal government and province say they are committing millions of dollars to municipal-led efforts to expand broadband and cell connectivity.

A spokeswoman for Infrastructure Canada said under a bilateral agreement with the province, Ontario will receive $250 million in funding for rural and northern community infrastructure projects including broadband infrastructure.

“The Government of Canada is committed to working with our provincial and territorial partners to ensure that our infrastructure investments are benefiting communities across the country,” Lama Khodr said in a statement.

Ontario has committed $315 million over the next five years for broadband and cellular expansion, said a spokeswoman for Infrastructure Minister Laurie Scott.

“We intend to work closely with all levels of government, including rural, northern and First Nations communities, and the private sector to leverage funding and innovative solutions which can improve access to broadband and cellular access for up to 220,000 households and businesses,” Jill Priest said in a statement.

Last week, Prime Minister Justin Trudeau held a roundtable with small business owners in Owen Sound, Ont., where he stressed that the federal government is trying to solve the problem but it will take time.

Several roundtable participants told The Canadian Press that during the closed-door session Trudeau was critical of the Ontario government, blaming the province for holding up spending on broadband expansion projects.

Thompson said the rocky relationship between the federal and provincial governments is impeding progress. He believes rural broadband services will be a federal election issue.

“At the end of the day it’s the communities, it’s taxpayers that are suffering here,” he said, urging the governments to work together.

Owen Sound Chamber of Commerce CEO Peter Reesor said businesses in the community are struggling to compete and some have chosen to move closer to urban centres to access services.

“You can go five kilometres outside of Owen Sound and have no access to a cell signal,” he said. “That’s a huge impact on business, particularly if you’re trying to work from home.”

The president of a stone quarry near Owen Sound said his business is challenged daily because of the slow internet speeds.

Andrew Negus said his clients, architectural firms in Toronto, send large files through email to his company and slow internet speeds hurt their ability to do business.

“We spend half a day to downloading them on our end,” he said. “Some of these are very time sensitive quote opportunities. We have a day or two to get a price in … it puts us at a disadvantage.”

A non-profit corporation set up by local leaders in southwestern Ontario is working to help subsidize service providers who build internet infrastructure in certain parts of the region. The Southwestern Integrated Fibre Technology initiative has so far secured a $200-million commitment from all levels of government.

Bringing broadband to the entire province, the group says, would cost between $2.5 billion and $3 billion. 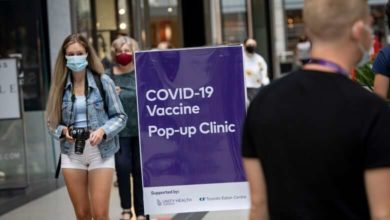