Toronto firefighters are trying to control a three-alarm fire in a commercial building that has closed a stretch of the Danforth early Tuesday.

No one has been injured in the blaze at 389 Danforth Ave., near Chester Avenue, but firefighters have evacuated neighbouring buildings due to smoke.

Toronto Fire said it has requested a TTC bus to provide shelter for any residents or business people forced out.

Firefighters were called to the two-storey commercial building at about 6:45 a.m., according to Capt. Michael Westwood, spokesperson for Toronto Fire. He called the fire a “stubborn” one.

“The good news is there have been no injuries reported at this time,” he said.

The fire is located on the main floor and in the building’s basement ceiling. The main floor contains Detroit Eatery, a popular diner on the Danforth.

Firefighters searched the building but have determined that no one is inside and there is no need for an evacuation.

Westwood said the cold weather is complicating firefighting efforts because the area has become icy and Toronto Fire has asked the city to salt the area.

Ice building up on firefighting gear

“Obviously, with water freezing, there are a lot of slip hazards,” he said. “Also the ice builds up on firefighting equipment and gear. It’s a challenge but we’re managing.”

Toronto Fire said the fire is not yet knocked down.

A three-alarm means about 75 firefighters and eighteen fire trucks have responded to the call. Toronto Fire is using aerial operations to fight the fire. 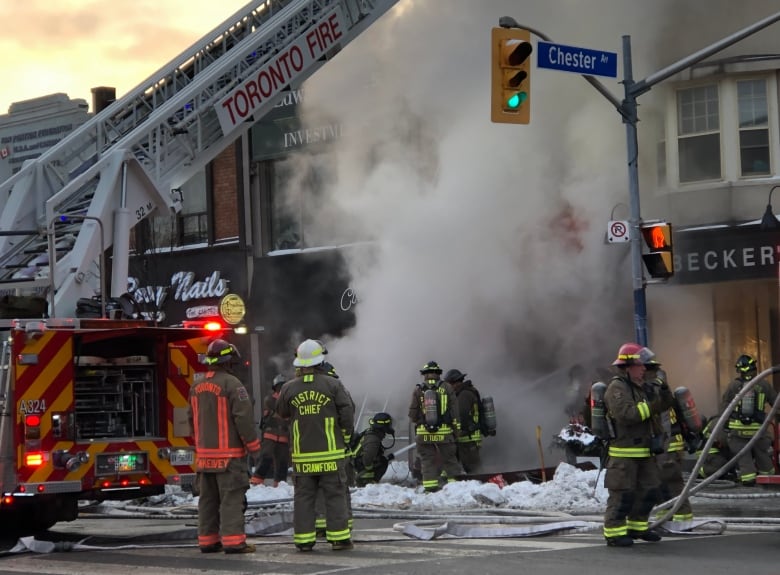 Smoke has prompted firefighters to evacuate nearby buildings. (Ian Kalushner/CBC)

Police have closed all lanes of Danforth Avenue, from Jackman Avenue to Logan Avenue, as the investigation into the cause and origin of the fire continues.

“It’s still considered an active fire,” he said. “There’s a lot of hose line and fire apparatus on scene there.”

Children’s Circle of St. Barnabas, a daycare located down the street from the fire, has been closed because of smoke.

Parents whose children attend the daycare have been told that the air quality will have to be checked before the daycare is deemed safe for children to return.

People are urged to avoid the area.