GO Train service has been suspended along the Lakeshore East line after an engine fire stopped a train travelling from Oshawa to Union Station on Monday morning, and forced a number of passengers out of their seats.

Firefighters, police and transit safety officers were called to the scene in the Don Yards, near the Distillery District in Toronto’s east end around 10:30 a.m.

The car behind the engine was evacuated and passengers waited inside the remaining cars for a second train to pick them up and take them to Union Station, Metrolinx spokesperson Anne Marie Aikins told CBC Toronto. 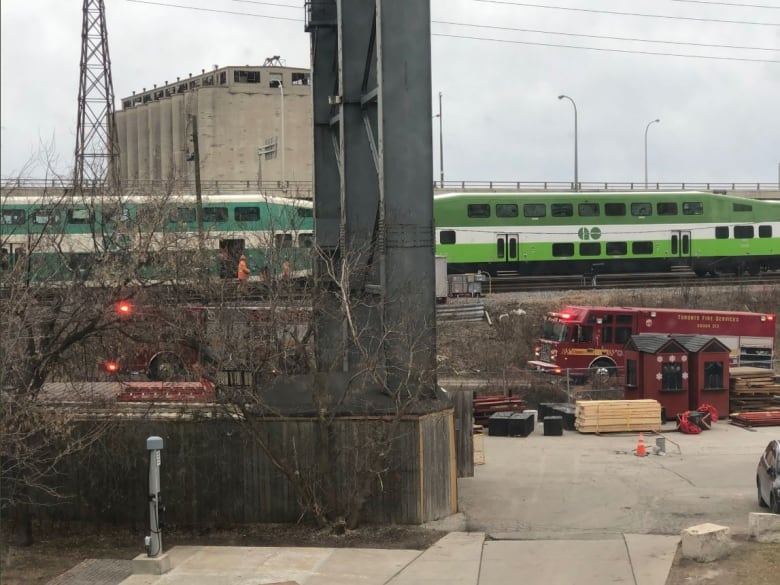 Emergency crews attend a fire on a GO Train near the Distillery District in Toronto’s east end on Monday. (Stephen Weir/Twitter)

“We’re very relieved our crew responded quickly and appropriately to ensure our customers, residents in the area and our staff are safe,” Aikins said.

The shutdown of the busy rail line is expected to end before the afternoon rush hour.

Fire crews were able to put the fire out quickly, Aikins said, adding there’s no word on what caused the fire.

“Residents were reporting a very strong stench of electrical burning, which gives off a very distinct stench,” she said, adding a full investigation is underway.

Aikins asked anyone travelling down to Union Station on Monday to check ahead to see if their train has been cancelled because “Union is pretty crowded.”

“It’s pretty unusual to have a locomotive to experience this so we don’t have a sense of how long this takes,” she said of the clean up.

The evacuated train was taken to Union Station.