Two families were forced from their homes overnight Thursday when a TTC bus slammed into two houses in Scarborough, causing extensive damage to both.

Toronto police Insp. Jim Gotell said officers first responded to the crash scene near the corner of Grackle Trail and Oasis Boulevard around 1:35 a.m., after receiving multiple calls from the public.

The TTC bus was unoccupied at the time, Gotell said, and the driver was taken to a nearby hospital as a precaution.

Images from the scene show that the bus appears to have hopped a curb on Oasis Boulevard before crashing into the two houses. No one inside the homes were injured, according to Gotell. 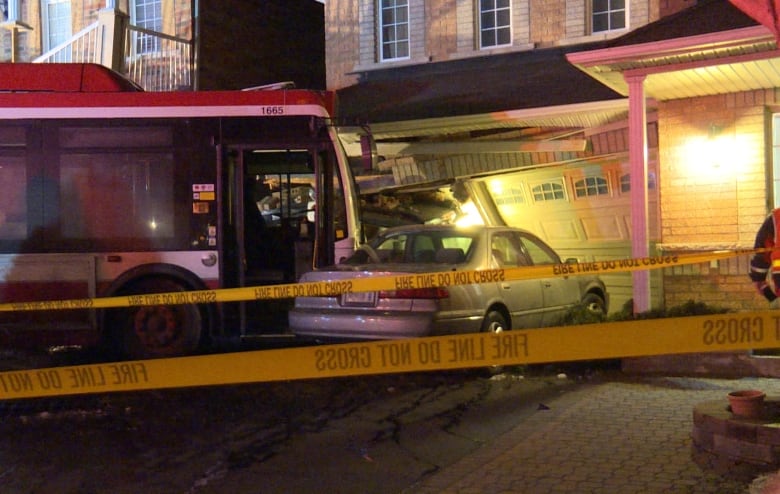 The crash also caused significant damage to a number of vehicles parked outside the homes. (Tony Smyth/CBC)

Enzo Ghanizada drives a tow truck, and he was the first person to respond to the crash.

“It was a very, very bad scene,” he said, adding that four cars were also damaged. Ghanizada said the bus driver walked out of the bus under her own power.

“She was just dazed. She came out, not sure what just happened. Very nervous and shaken up.”

Jenitha Anandarajah, who lives in one of the homes, was asleep when the bus slammed into her house.

“I heard this sound, a big blast, like a bomb blast,” she said. Anandarajah shook as she spoke to CBC Toronto.

Her neighbour, Ruby Mohan, was also asleep in her home with her husband and three children. She said it’s not the first time a vehicle has crashed into her home, though last time it was a small car that caused only minor damage.

Toronto police’s traffic services and crews with Toronto Fire were at the location through the night. In a twist of cruel irony, the displaced families spent the night sheltered in a TTC bus.

An engineer has been called into assess the extent of damage to the houses, but they aren’t expected until after dawn.

“We’re concerned there may be some structural damage to the house,” Gotell said.

Police expect the families to be out of their homes for at least the duration of Thursday and possibly longer.