Prime Minister Justin Trudeau announced today that the federal government will extend the Canada emergency response benefit (CERB), with details to follow in the days ahead. 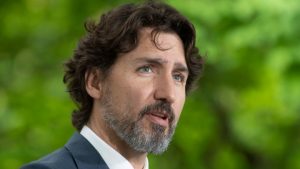 The CERB is due to run out soon for people who have been on the benefit since it was first launched in April, at the outset of the COVID-19 pandemic. People can only claim the benefit for 16 weeks — four eligibility periods — and the end of the program’s fourth eligibility period is early July. “We’re working on a solution to extend the benefit for people who can’t return to work yet. We’ll have more details this week, but for today, I want you to know that we’ll continue to be there for you and your family, Trudeau said. ”

Treasury Board President Jean-Yves Duclos said today the “situation has changed” since the CERB was first introduced — the economy has re-opened in many parts of the country — so there will be “new parameters” to the program when the extension is formally announced. He said the program will be adapted to the “current context.”

While more than eight million Canadians have applied for the relief benefit during this economic slowdown, the take-up for the wage subsidy program — which floats government funds to employers to keep employees on the payroll — has been considerably lower.

The government cut its projected budget for the wage subsidy for the 12-week period between April and June from $73 billion to $45 billion. As of June 8, the program has paid out only $10.5 billion in wage subsidies. “To all employers — please use the wage subsidy if you haven’t already. This help is designed for you and your employees,” Trudeau said.

NDP Leader Jagmeet Singh has made extending CERB eligibility a condition of his party’s support for a key piece of fiscal legislation that is set to be tabled in the House of Commons this week. The government will present the supplementary estimates on Wednesday and Parliament must pass that bill, which gives the government the authority to spend on programs and services.

The legislation is considered a confidence vote — meaning the government could fall if it doesn’t obtain the support of at least one of the opposition parties for these estimates. “There needs to be an extension of CERB,” Singh told reporters Monday. “It’s not acceptable for millions of Canadians to not know what’s going to happen and we want to find a way forward. We’re having negotiations about that fact that the government needs to release a plan on how they’re going to help Canadians in this crisis.”

Trudeau also announced that the government will start accepting new applications for the Canada emergency business account (CEBA) starting Friday. The government has expanded program eligibility to include sole proprietors and farmers. The program offers government-backed loans of up to $40,000, interest-free until the end of 2022, administered by banks. The government has said it will forgive 25 per cent of such loans, up to $10,000, for those who pay their loans back on time.