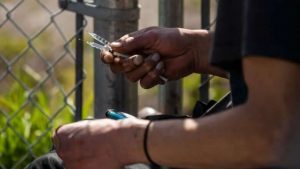 As Canada continues to battle an opioid epidemic, the Canadian Association of Chiefs of Police is calling on federal lawmakers to decriminalize the possession of small amounts of illegal drugs for personal consumption.

CACP’s president, Chief Const. Adam Palmer, said it’s time to rethink how police and governments approach the use and abuse of illegal drugs in order to save lives.

“Arresting individuals for simple possession of illicit drugs has proven to be ineffective. It does not save lives,” Palmer said. “The CACP recognizes substance use and addiction as a public health issue. Being addicted to a controlled substance is not a crime and should not be treated as such.

“We recommend that Canada’s enforcement-based approach for possession be replaced with a health-care approach that diverts people from the criminal justice system.”

CACP is a non-profit that represents about 1,300 police chiefs from federal, First Nations, provincial, regional, transportation and military police services across the country.

Palmer said that, as an alternative to the criminal model, partnerships could be formed between social services, police, the health-care sector and governments to ensure drug users get access to the treatment they need.

The focus of police efforts, he said, should be on cracking down on drug trafficking and the illegal production and importation of drugs — a task the police are better suited to address.

Palmer said such a shift in policing would require changes at the federal level to the Controlled Drugs and Substances Act.

In 2018, the CACP tasked a committee with exploring the impacts on public safety and policing of moving toward decriminalization.

That report, delivered this month, concluded that substance abuse is a public health issue and that taking a public health approach to the problem would lead to lower rates of crime, overdoses and blood-borne diseases.

Palmer was asked about the #defundthepolice movement on social media and whether police forces in Canada are willing to see their funding diverted toward social services or health care.

He said that in Vancouver, where he serves as chief constable of the Vancouver Police Department, police are already looking the other way on cases of simple possession in order to focus resources on trafficking and production — so there may not be much money to divert.

Palmer did say he was willing to discuss the notion of redirecting police funding to other initiatives if all affected parties are consulted.

A statement from Minister of Health Patty Hajdu and Justice Minister David Lametti said they welcomed the “endorsement of a holistic approach” to dealing with the opioid crisis.

“We appreciate efforts made by law enforcement officers to consider alternative options to criminal charges for simple possession of illicit drugs in appropriate cases, and recognize the importance of reducing barriers to treatment, as well as integrated partnerships between law enforcement and health and social services,” the statement said.

The ministers went on to say that the federal government would continue to work with substance abuse experts, first responders and law enforcement to further their own public health approach to dealing with the opioid epidemic.

“Our government remains committed to advancing evidence-based responses to help reverse the trend of opioid overdose deaths and other substance-related harms in Canada.”

P.E.I. to replace pap tests with HPV tests — but COVID is delaying the switch