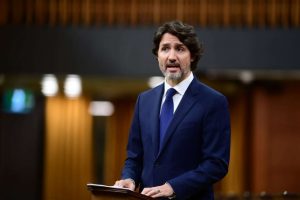 Two years after the National Inquiry into Missing and Murdered Indigenous Women and Girls (MMIWG) released its landmark report, the federal government today presented its response — a 30-page report promising a series of “transformative changes” to tackle the persistent inequities Indigenous people face when dealing with the justice system.

The ‘Federal Pathway’ report called for a holistic approach, co-developed with input from First Nations, Métis and Inuit peoples, to end the scourge of violence disproportionately directed at Indigenous women and gender-diverse people.

The plan includes government promises to spend more on Indigenous language, culture, infrastructure, health and policing. Ottawa will give communities more control over social services to ensure a culturally relevant approach to governance.

“As a government and as Canadians, we must do more and we vow to do better to end this national tragedy,” she said, citing statistics that show Indigenous women and girls are 12 times more likely to be murdered or go missing than other women in Canada.

While they account for just four per cent of the Canadian population, Indigenous women were the victims in 28 per cent of all homicides perpetrated against women in 2019, according to data from Statistics Canada — something Bennett said is driven by systemic discrimination and the country’s history of colonialism.

Speaking at a ceremony marking the release of the report, Prime Minister Justin Trudeau promised $2.2 billion in new spending over five years to implement the ambitious new programming.

“To the survivors and families, elders, representatives and commissioners and to everyone involved in this work — your voices have been heard,” Trudeau said, adding that he accepts the inquiry’s finding that the perpetual violence inflicted on Indigenous women is tantamount to genocide.

“To truly heal these wounds, we must first acknowledge the truth. And not only about residential schools, but about so many injustices, both past and present, that Indigenous peoples face,” he said.

The families of missing and murdered Indigenous women have long maintained the country’s justice system is riddled with racism, which often results in an insufficient police response to violent crimes in Indigenous communities and fewer solved cases.

The government said it will introduce new legislation to recognize First Nations-led policing as an “essential service” and direct more money to these on-reserve crime-fighting efforts.

Ottawa is also promising to expand the First Nations policing program to new communities and fund the work of repairing, renovating and replacing existing police facilities in First Nations and Inuit communities.

Beyond giving communities more resources to better police themselves, the federal government is also promising new investments for the RCMP, which is often responsible for policing in rural, Northern and remote communities.

Ottawa says it will direct the RCMP to address systemic racism in its ranks through “reforming recruitment and training processes,” collecting more race-based data to better track crime statistics and establishing the RCMP-Indigenous Collaboration, Co-development and Accountability Office — a new directorate aimed at improving relations between police and the Indigenous peoples they serve. The government says it wants RCMP officers to view their actions through an “Indigenous lens” to avoid stigmatizing crime victims.

Discrimination in health care to be addressed

To help women fleeing familial violence, the federal government is promising to spend more on transitional housing, increase the number of shelters for Indigenous women and children on reserve in the North and in urban areas, and “expand community reintegration support” for Indigenous women who are criminal offenders.

In addition to bolstering policing resources, the government says it wants to address discrimination in health care to ensure better outcomes.

The harassment of Joyce Echaquan, an Atikamekw woman who faced racist attacks by Quebec health-care workers while she lay dying in hospital, has inspired Ottawa to work with provincial, territorial and Indigenous partners to address bigotry and “extreme health inequities and social disparities,” said the report.

The federal government says it will soon table new health care legislation designed to root out anti-Indigenous racism in the provision of care.

The government says it wants to see more “health care system navigators” and patient advocates to help Indigenous peoples interact with doctors and nurses, and to expand the use of First Nations and Inuit midwives and doulas, the people that support pregnant women while they are in labour.

Like the new training it will now demand for the RCMP, Ottawa says it wants “cultural safety training” for medical professionals to avoid a repeat of what happened to Echaquan.

The government says it is determined to increase Indigenous control and responsibility over the “design, delivery and management of federally funded health services.” It will also spend more money to improve sexual and reproductive health care services for Indigenous women on and off reserve and bolster the mental health services available to them.

As the opioid epidemic continues to claim the lives of hundreds of Canadians each year, the federal government is promising to earmark new funds for community-based substance use treatment and prevention programs to help Indigenous people struggling with addiction.

The federal government also says it will also establish a new National Institute for Women’s Health Research to study ways to improve health care outcomes for women from marginalized communities.

To promote overall health and well-being, the government said communities should be supported as they revitalize Indigenous language and culture.

Ottawa promised to strengthen opportunities for Indigenous “cultural expression, participation, promotion and representation in the arts, cultural industries and media” and it said it would continue to protect Indigenous languages in Canada — many of which are facing extinction after centuries of colonialism.

The federal government said that, by building on 2019 legislation that created the Indigenous Language Act, it would support initiatives such as language and culture camps.

“Government policies and laws that prevented the ability to practice and to pass on cultural knowledge and languages have created conditions in which the significant roles and identities of Indigenous women, girls and 2SLGBTQQIA+ people are less valued,” the federal document says.

Bellegarde said the police and the justice and health care systems “must all be accountable to the First Nations people they serve and they must commit to implementing the calls for justice,” he said.

“It will take years to unravel decades of colonial policies and the campaign of genocide against our people but we are here today to commit to that work.

“Our people have suffered enough. We need action, we need implementation of all these recommendations.”

Nearly 9 million Canadians have uncashed cheques from the CRA — worth $1.4B