The Ontario NDP is calling for an investigation into what it calls a series of anti-teacher advertisements that ran in three national newspapers over the weekend, but the government is already denying any involvement.

“These ads cost much, much more than that,” Natyshak said at a news conference Monday.

The advertisements, from a group calling itself Vaughan Working Families, say parents support the government during a tense round of contract talks with provincial teachers’ unions.

Natyshak says the advertisements mimic government speaking points and alleges partisan supporters may have purchased them.

“These ads have all the hallmarks of a Doug Ford smear campaign. They almost use all of their talking points verbatim,” he said.

A spokesperson for Ad Standards — the national, not-for-profit, advertising self-regulatory body — says the ads in question fall under “political advertising,” which is outside the scope of the Canadian Code of Advertising Standards.

Christian Campbell says based on the code’s interpretation guidelines, political advertising includes ads about “a policy or issue that is the current subject of debate at any level of government.”

He says most of the complaints received publicly through social media were not about the content of the advertising, but that the named advertiser — Vaughan Working Families — is not the actual advertiser.

“As a self-regulatory body, we do not have the authority or ability to investigate advertiser funding,” Campbell wrote in an email to CBC News.

“This is why we reached out to the newspapers themselves, since they will have better ability to determine who placed the ad. We have received confirmation that each is independently investigating.”

‘It’s not something that we put out,’ PC house leader says

Paul Calandra, the PC government house leader told CBC Toronto he hasn’t seen the ads, but denied any involvement in their placement.

“The government obviously is not involved in any way, shape or form,” he said.

It’s unclear who purchased the full-page, colour ads as there is no contact information listed for Vaughan Working Families.

The Toronto Star, one of the newspapers that ran the ads, said in a statement, “This matter has been brought to our attention.”

The Globe and Mail and Postmedia, which owns the National Post, did not immediately respond to requests for comment.

‘This does nothing to help kids’

Natyshak calls the group that bought the ads an anonymous and shady shell organization and says their intention is not to help the negotiations between the province and the teachers’ unions.

“Whoever placed this advertisement had the full intention of causing more chaos,” he said.

All four major unions have been engaged in escalating job actions in recent weeks as bargaining with the government appears to have made little progress.

Charles Pascal, a former deputy minister of education for the province, says the public support for the teachers and their job actions is overwhelming and the ads are a “remarkable display of desperation” from the government.

“I find it extremely difficult to believe that the money that was put up for $50-$80,000 ads was unknown to the premier of the province and the minister,” he told CBC Toronto.

The Elementary Teachers’ Federation of Ontario (ETFO) ramped up its job action today as contract talks with the province broke off last week.

Sam Hammond, ETFO’s president, tweeted about advertisements over the weekend saying whoever purchased the ads have “some deep pockets.”

Wow! The Vaughan “Working” Families have some deep pockets when you consider it costs between $50-$80,000 for these 2 one day ads, not to mention the PR firm costs to develop the ads! @ETFOeducators #ETFO @OFLabour @osstf @OECTAProv @AEFO_ON_CA 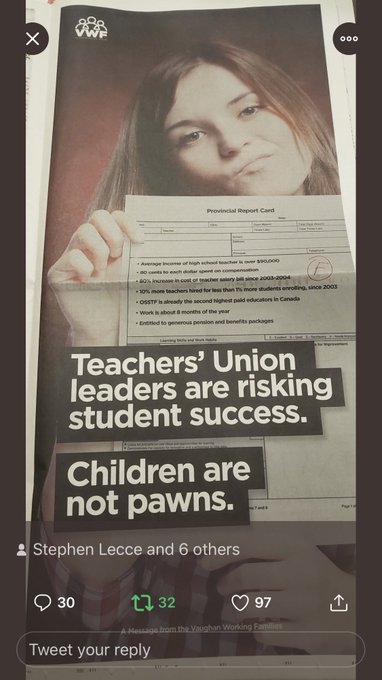 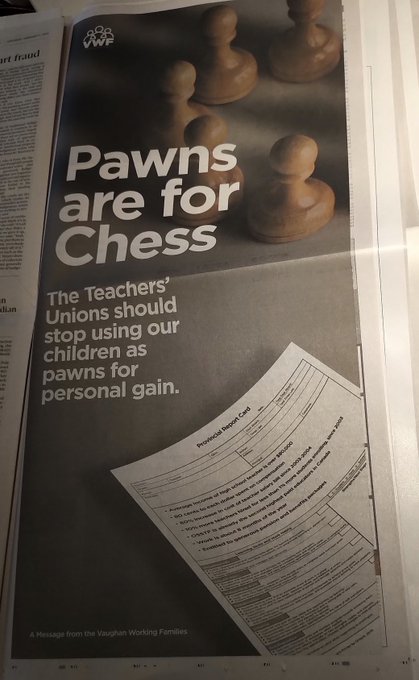 Calandra said the government is focused on getting back to the bargaining table.

“For us, the best approach is to get back to the table and have a negotiated settlement that includes our partners in the education system,” he said.

Quebec calls on bureaucrats to work in hospitals amid staffing shortage