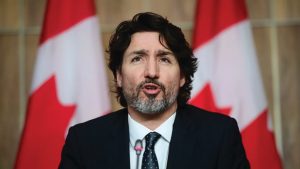 Moderna will send far fewer COVID-19 shots to Canada this month than originally planned as the company grapples with production issues at its facilities in Europe.

But its main competitor, Pfizer — which also produces a highly effective mRNA vaccine against the novel coronavirus — has said it will send millions more doses to Canada in May, June and beyond, a commitment that will more than cover the shortfall from Moderna.

Massachusetts-based Moderna was poised to send 1.2 million more doses to Canada this month, but that shipment has been cut back to just 650,000 shots.

While those vaccines were to arrive next week, the reduced shipment is now not expected until later this month — possibly as late as the first week of May.

And although Canada was expecting to receive 12.3 million doses of Moderna’s COVID-19 vaccine by the end of June, the company has now told officials that it will be one to two million shots short of that goal. Delivery of those doses will be pushed into the July-through-September period.

Prime Minister Justin Trudeau said Friday that while the delay in Moderna’s shipments is disappointing, Canada has now signed an agreement with Pfizer for eight million more vaccine doses on top of what has already been promised.

That means Canada’s immunization campaign will have access to two million doses per week of the Pfizer product in May and 2.5 million shots per week in the month of June — vaccine stocks that are badly needed as the country grapples with a punishing third wave of cases.

“I want to thank everyone at Pfizer for their cooperation and hard work, not just to keep deliveries on schedule, but to move more doses up and reach new agreements,” Trudeau said.

All told, Canada is now expecting 23.8 million doses of the Pfizer product in the second quarter of this year alone, up from the 17.8 million doses that had been expected.

Even with the Moderna disruptions — which could punt delivery of up to two million shots to a later date — Canada will receive at least 4 million more shots in May and June than anticipated, thanks to the Pfizer deal.

The Moderna delays are being attributed to “a slower than anticipated ramp-up of their production capacity” at plants in Europe, Public Services and Procurement Minister Anita Anand said.

“We are disappointed, and while we understand the challenges facing suppliers in the current global market for vaccines, our government will continue to press Moderna to fulfil its commitments,” Anand said.

“When Moderna provides additional information, we will share it as soon as it is received. We continue to press Moderna for consistency of supply to Canada.”

The 855,000 doses of the Moderna product that were supposed to arrive the week of April 5 have only started to show up over the last several days, hampering planned immunization clinics in some provinces.

In a statement, a spokesperson for Moderna said it would be making “adjustments” to the number of shots it sends to Canada and some other countries in the coming weeks.

“The trajectory of vaccine manufacturing ramp-up is not linear, and despite best efforts, there is a shortfall in previously estimated doses from the European supply chain. Vaccine manufacturing is a highly complex process and a number of elements, including human and material resources, have factored into this volatility,” the spokesperson said.

The company said it will make “substantial capital investments” to bolster production and explore “other potential collaboration opportunities” so that it can make more shots to meet insatiable global demand for its highly effective product.

Before COVID-19 hit, Moderna had no experience in producing such products on a large scale. It has partnered with Switzerland-based pharmaceutical manufacturer Lonza to help make its vaccine. The company also has contracted with other companies in the U.S. to pump out its mRNA vaccines for the American marketplace.

Hundreds of thousands of Canadians are travelling abroad despite Omicron