Anecdotal evidence has suggested the four major hospitals in northeastern Ontario have been stretched. Long wait times and patients in ‘non conventional spaces’ all demonstrate this.

The data suggests the system is beyond capacity.

Sudbury: A problem since the ‘one site hospital’ opened

Health Sciences North is the one site hospital that came out of cuts in the 1990s. The original project went over budget and resulted in a downsizing of the final hospital, according to HSN CEO Dominic Giroux. 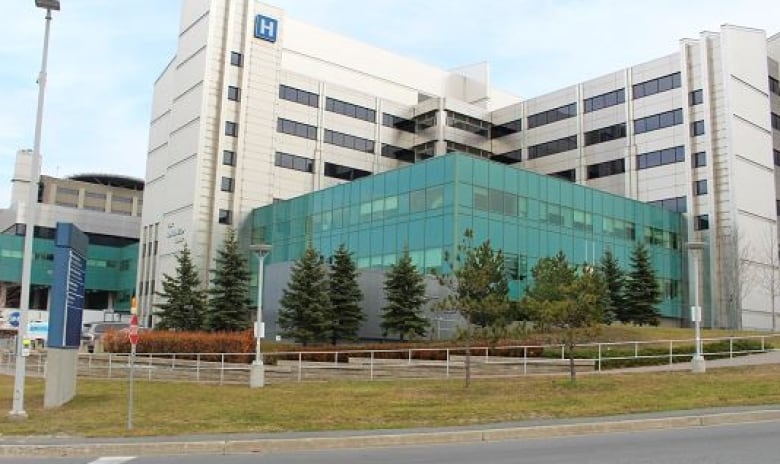 The one site Health Sciences North was supposed to have 86 more beds, but due to cost overruns, the project was scaled down resulting in regular capacity issues for over a decade. (supplied)

“The working assumption was that there would be zero alternate level of care patients at HSN,” he said. “Well today we have 86 ALC patients in the exact same number. So if that reduction of 86 beds had not been done in 2003 we would not be having capacity issues today.”

Giroux says the mistakes of the past are why he is pushing for forward looking planning including a new capital plan, a strategic plan and working with the Ford government to end hall way health care.

“Understandably when we’re not having turnover in our acute care inpatient units we can’t pull up patients from the E.R. into those beds and we have to house them in our E.R.,” said Wait Time Coordinator Tiina Guillemette .

“Some people simply cannot afford to go to a retirement home setting,” said Guillemette. “Long term care is the only option available to them.”

When long term care is not available, patients stay in hospital.

Recent funding for additional beds by the North East Local Health Integration Network which is confirmed through to the end of March, has taken the pressure off a bit, say hospital staff.

“When we had our 16 admitted patients waiting for beds we were able to expedite some discharges. Had we not had the 12 beds it would have been a disaster,” said Dr. Harry Voogjarv, Chief of Staff. “Our emergency department would be stuck seeing one or two people at a time as opposed to being able to assess their usual 20 people at a time.”

TADH managed to spread the funding for 10 acute care beds to create a total of 12 ALC beds by using an alternative care model similar to that found in a long term care home.

“We have been asked to provide numbers around additional bed capacity and and we certainly shared in addition to the twelve beds that we currently have in place throughout the hospital we have the capacity for another 20,” said Joan Ludwig, VP Clinical, Chief Nursing Executive, Timmins and District Hospital.

Staff say it’s this kind of solution-oriented thinking that can bridge the gap in Ontario’s health care system.

Staff at North Bay Regional Health Centre say the closure of the 66-bed Lady Isabelle Nursing Home has caused a ‘patient flow crisis’ since the summer of 2017.

Spokesperson Kimberley McElroy says capacity issues have persisted since then and acknowledged the precariousness of the situation ahead of possible impacts by this year’s flu season.

“The ideal occupancy for acute to maintain optimal patient flow is 80-85%,” McElroy said. Despite that, most hospitals in the region examine capacity based on 100% use.

“We have been struggling with capacity for some time for sure we would be probably quite similar in our pattern with other community hospitals in Ontario,” says Ila Watson, Sault Area Hospital Interim President and CEO.

Watson says bridge funding like this is critical to relieving pressures on the hospital system in the short term.

“So those types of investments and commitment are enabling us to be more plentiful and ensuring that we’re able to open beds that are appropriate for the medical patients that we are getting rather than having people stay as admitted patients in an emergency department,” she says.

The Sault Area Hospital has recently converted several areas in the hospital to have overflow beds. While not traditional clinical spaces, Watson says the hospital needs to be creative to address the challenge.

“If we change nothing our costs increase at rates greater than our funding has been increased and that has been a continual pattern. We’ve done a lot of things to create efficiencies and some of the lower hanging fruit is now gone. One of the most significant recent pieces of work that our organization has done is focus on senior friendly care.”

“We have also made some significant strides in the way in which we care for the elderly,” she said. “People who might otherwise in years past been destined to either stay in hospital or to move to a long term care facility are now managed in different ways that focus on bringing them back to the state that they were before they came into hospital.”