The employment gap between immigrants and Canadian-born workers is narrowing, as employers increasingly rely on newcomers to fill jobs, new research from Statistics Canada shows.

The federal research agency found 78.9 per cent of newcomers aged 25 to 54 are in the workforce, compared to 84 per cent of people who are Canadian-born.

The unemployment rate for core working-age immigrants in 2017 was 6.4 per cent, the lowest since 2006 when Statistics Canada first began tracking employment among newcomers through its Labour Force Survey.

The comparable jobless rate among Canadian-born workers is five per cent.

Statistics Canada defines core working age as 25 to 54, a time when individuals in are most likely to have finished their schooling and not yet retired from the workforce.

Canada has an aging workforce, with the large baby boom population moving into retirement age and fewer young people available to take up jobs.

In 2017, 26 per cent of Canada’s total workforce of core working-age were landed immigrants.

Statistics Canada says first generation immigrants will make up an increasingly important part of the workforce over the next decade.

By 2036, it projects the share of immigrants in Canada’s population would stand between 24.5 per cent and 30 per cent and Canada will be competing with other industrial countries for a share of young, skilled workers.

Most of the growth in the workforce between 2016 and 2017 was accounted for by immigrants of core working age and Canadian-born workers aged 55 and older. 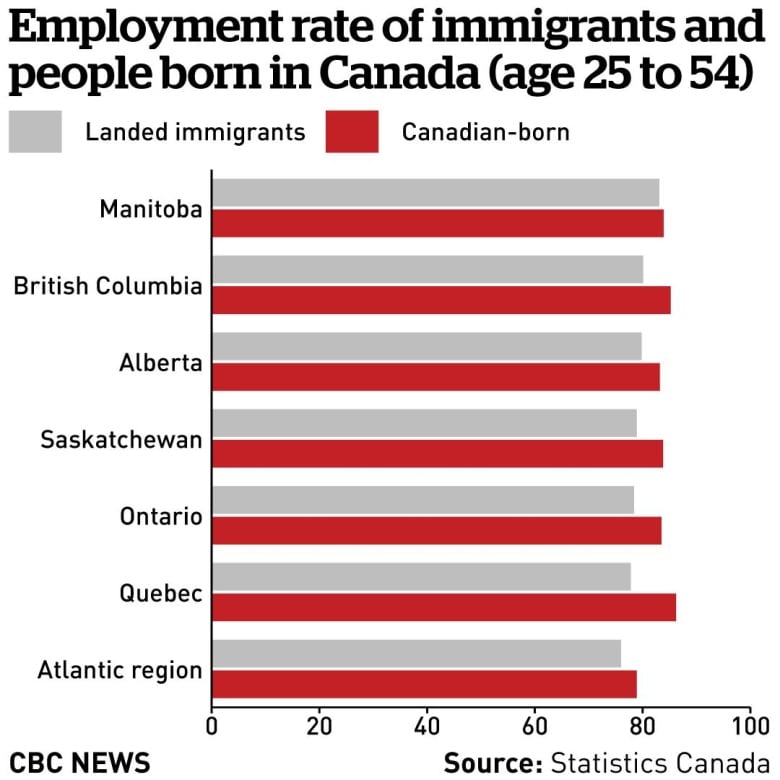 The employment-rate gap between immigrants and the Canadian-born has narrowed for three consecutive years, and was lower than the national average in Manitoba and Alberta.

Newcomers who have been here 10 years or longer are most likely to have full-time employment. Still 65.2 per cent of those who came within the last five years were working.

Many people relate tales of struggling in their first few years in Canada, but the figures seem to indicate they eventually find work, though perhaps not in the field they prefer.

Newcomers are more likely to have low-paying jobs in the accommodation and food industries, but are also one third of the workforce in high-paying industries such as finance, insurance, real estate, rental and leasing services, as well as professional, scientific and technical services.

The highest employment rates were among immigrants from the Philippines, with 88.5 per cent of them having jobs, a better rate of employment than the Canadian-born population.

Statistics Canada attributes this to high levels of education among Filipino immigrants, as well as strong English skills and a school system closely related to the North-American system.

Immigrants born in Africa had less success in the job market with 72.5 per cent of them employed. They make up about 10 per cent of Canada’s immigrant labour force aged 25 to 54.

This group may have more difficulty because a lot of them come to Canada as refugees and are likely to have less support, including family support, in their early years in Canada, the federal agency said.

Immigrant women are also less likely to be employed than men — with 72 per cent of them in the workforce, compared with 82 per cent of Canadian-born women in the core age group.