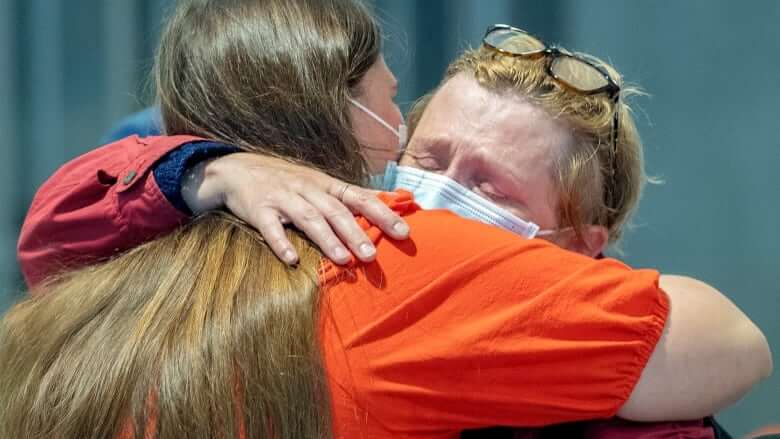 A Ukrainian national fleeing the ongoing war in Ukraine, right, is hugged as she arrives at Trudeau Airport in Montreal on May 29, 2022. (Graham Hughes/Canadian Press)Immigration Minister Sean Fraser said Thursday Ukrainians who have fled their war-torn country for Canada can now apply for a cash payment — money the government says will help these displaced people settle into their new home.

Ukrainians who are in Canada on valid work, study or temporary resident permits under the Canada-Ukraine authorization for emergency travel (CUAET) regime are eligible for a one-time payment — $3,000 for every adult and $1,500 for every child 17 years and under.

The government launched a new portal today to process applications for this transitional financial assistance.

To qualify for the money, eligible Ukrainians must also have a Canadian bank account. The names associated with these bank accounts must match the names written on Ukrainians’ resident status documents. Applicants must have a bank account because the payments will be made through direct deposit.

The government also stressed that Ukrainians should apply for a social insurance number (SIN) as soon as they arrive so they can start looking for work.

Fraser said the new funds will help Ukrainian nationals and their family members meet basic needs like transportation and housing as they start to arrive in Canadian communities.

“Our commitment to Ukrainians fleeing Russia’s illegal war doesn’t stop once they’ve arrived in Canada. We will continue to help those seeking refuge live and thrive in communities across the country. This one-time financial assistance will be crucial in addressing the immediate challenges faced by Ukrainians who have left so much behind to find a safe haven in Canada,” Fraser said in a media statement.

Russian President Vladimir Putin’s unprovoked military assault on Ukraine has triggered a massive humanitarian crisis that has forced hundreds of thousands of people from their homes. The UN estimates more than 4,000 civilians have been killed already in Russia’s war on Ukraine.

To help people fleeing the war, Canada has promised that an “unlimited number” of Ukrainians can apply to settle here temporarily. The government has chartered a number of jets to ferry people from the region to different points nationwide.

Foreign Affairs Minister Mélanie Joly also met Thursday with her counterparts from the Baltic region. She hosted ministers from Estonia, Latvia and Lithuania in Quebec City for talks on the ongoing crisis in Ukraine.

Joly said that Canada stands ready to send more troops into the region as part of an ongoing NATO mission to support allies in the face of Russian aggression.

As part of Operation Reassurance, Canada already has 700 Canadian Armed Forces personnel in Riga, Latvia’s capital, with 450 more on the way.

Canada has about 3,400 more military personnel prepared to deploy to the region if NATO decides to further reinforce its eastern flank, Joly said.