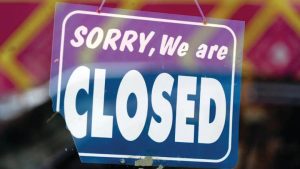 More than 200,000 Canadian businesses could close permanently during the COVID-19 crisis, throwing millions of people out of work as the resurgence of the virus worsens across much of the country, according to new research.

Meet Canadians who started businesses during the pandemic

The Canadian Federation of Independent Business said Thursday one in six, or about 181,000, Canadian small business owners are now seriously contemplating shutting down.

The CFIB surveyed 4,129 of its members in an online questionnaire between Jan. 12 and 16. Because it was just of CFIB members, the poll is not statistically randomized, but a properly randomized poll of that size would be considered accurate within 1.5 percentage points, 19 times out of 20.

An estimate by the CFIB last summer said one in seven or 158,000 businesses were at risk of going under as a result of the pandemic.

Based on the organization’s updated forecast, more than 2.4 million people could be out of work — a staggering 20 per cent of private sector jobs.

Simon Gaudreault, CFIB’s senior director of national research, said it was an alarming increase in the number of businesses considering closing.

“We are not headed in the right direction, and each week that passes without improvement on the business front pushes more owners to make that final decision,” he said in a statement. “The more businesses that disappear, the more jobs we will lose, and the harder it will be for the economy to recover.”

In total, one in five businesses are at risk of permanent closure by the end of the pandemic, the organization said.

The grim new research comes after a brutal year for Canadian businesses.

“The beginning of 2021 feels more like the fifth quarter of 2020 than a new year,” said Laura Jones, executive vice-president of the CFIB, in a statement.

She called on governments to help small businesses “replace subsidies with sales” by introducing safe pathways to reopen to businesses.

“There’s a lot at stake now from jobs, to tax revenue to support for local soccer teams,” Jones said. “Let’s make 2021 the year we help small business survive and then get back to thriving.”

Hundreds of thousands of Canadians are travelling abroad despite Omicron