While Ontario and Quebec have recently rolled out new restrictions in their hardest-hit regions to try to stem a surge in COVID-19 cases, some of Canada’s smaller provinces in the Prairie region and Atlantic Canada are also beginning to see an alarming uptick in numbers.

Manitoba reported its third record-breaking day in less than a week, with 124 new cases on Tuesday. It was also the province’s first triple-digit tally.

Dr. Brent Roussin, Manitoba’s chief public health officer, said most of the new cases — 95 of them — are in Winnipeg, which hit a test positivity rate of 4.4 per cent on Tuesday. Manitoba set a new record for the provincewide rate at 3.5 per cent.

The test positivity rate is a rolling average of the proportion of COVID-19 tests that come back positive, and Roussin has said it’s a critical metric in the virus’s spread.

Roussin said another lockdown isn’t needed now since the health-care system is still keeping up with demand, but warned that climbing case counts and growing community transmission have strained contact tracing resources.

The six new cases reported on Tuesday bring the total of active cases in the province to 82, higher than at any other time during the pandemic. Five of those people are in hospital, with one in intensive care. The recent developments have prompted the Chief Public Health Office in P.E.I. to advise Islanders to avoid non-essential travel in and out of the Moncton region. 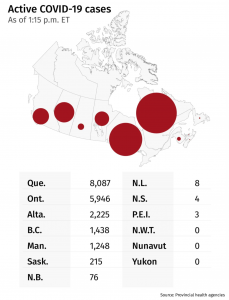 The rising case count in their neighbouring province has some P.E.I. businesses worried. Maritime Bus owner Mike Cassidy said about half of his company’s daily travel is between provinces, and if the new cases lead to closing the Atlantic bubble, it could mean an 80 per cent decline in revenue.

As of 9:15 a.m. ET on Wednesday, Canada had 186,881 confirmed or presumptive coronavirus cases. Provinces and territories listed 157,486 of those as recovered or resolved. A CBC News tally of deaths based on provincial reports, regional health information and CBC’s reporting stood at 9,654.

Chief Public Health Officer Dr. Theresa Tam says Canadians don’t have to cancel Halloween this year, as long as children and parents take special pandemic precautions. At a briefing in Ottawa Tuesday, Tam advised parents and kids to maintain physical distancing while trick-or-treating outside, to stick to pre-packaged treats and to have hand sanitizer readily available. She also said that a creative use of “different fabrics” can turn a day-to-day face mask into part of a costume.

Tam stressed that parents and children should follow guidelines set by local health authorities, as some local COVID-19 caseloads are far larger than others.

The COVID-19 pandemic created high demand for hand sanitizers. Health Canada said in June that it permitted the temporary use of technical grade ethanol — which contains more impurities than pharmaceutical or food-grade ethanol — if manufacturers chose an authorized supplier and obtained Health Canada’s permission first.

In the world of sports, Canada Soccer has cancelled a planned women’s national team camp this month in England on the advice of medical experts. The Canadian women, ranked eighth in the world, were to have played No. 6 England in their first get-together since a March tournament in France just prior to the lockdown. While roster invitations were sent out, the trip has now been called off.

“We listened to our federal public health officials and authorities, who offered us guidance,” said Canada Soccer general secretary Peter Montopoli. “And in the end, they were instructing us not to travel. We listened to them.”