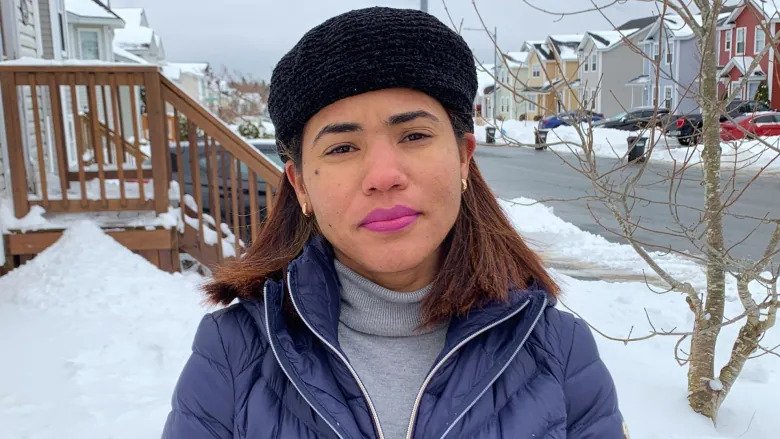 Diomerys O’Leary was already nervous about letting her 14-year-old daughter fly alone to visit her dad in the Dominican Republic, but she never imagined Air Canada would abandon the girl in Canada’s biggest airport after cancelling the last leg of her trip home.

An email on Jan. 18 notified O’Leary that her daughter Eva’s flight from Toronto’s Pearson International Airport to St. John’s was cancelled due to a labour disruption at the Newfoundland and Labrador airport, and rescheduled for two days later.

Then came the flood of texts from her panicked daughter, saying Air Canada told her she was on her own to find a place to sleep, food and transportation.

O’Leary told her daughter to go back to the Air Canada counter and ask for help again, but says staff turned the girl away a second time.

“She was crying and desperate, asking me ‘What do I do?’ … I just couldn’t believe it,” O’Leary told Go Public.

Got a story? Contact Rosa and the Go Public team

That was the beginning of a 24-hour ordeal, as O’Leary scrambled from more than 2,000 kilometres away to find a place for her daughter to stay, and something to eat.

“What did they [Air Canada] expect for her to do? Sit on a bench, and sleep there for days and not even give her food, or anything?” O’Leary said.

A passengers’ advocate who was part of the government consultations that led to the Air Passenger Protection Regulations says the airline’s own rules allow it to avoid taking responsibility.

“[This will come] as a pretty big surprise to a lot of adults if they do send their child on a plane … because under Air Canada’s own rules, they could be abandoned,” said Ian Jack, vice president of public affairs at the Canadian Automobile Association.

“You would expect that the carriers would have good procedures in place for this.”

Like other airlines — WestJet and Air Transat among them — Air Canada offers a for-fee service subject to certain conditions, where staff help kids flying on their own. But that service is not available for multi-leg trips like Eva’s.

In those cases, the airline said in an email its practice, “is to give priority assistance to certain passengers travelling with us, such as disabled, elderly and young people,” but says, that day, it was dealing with “unexpected and abrupt” flight cancellations and “hundreds of customers requiring assistance.”

O’Leary got a flood of panicked texts from her daughter, as she scrambled to find a safe place for the 14-year old to sleep. (Ted Dillion/CBC)
‘Worst day of my life’

O’Leary spent hours on the phone and online trying to organize help for her daughter, while the girl waited alone at the Toronto airport.

Hotels would not take an underage teen. She didn’t have any cash for food and her Apple Pay app was not working.

O’Leary finally found an Airbnb that would allow Eva to stay the night, booked an Uber to get her there, and ordered delivery so her daughter could eat.

“It was the worst day of my life,” she said. “Even after I accommodated her, I wasn’t able to sleep that night.”

The next step was getting her daughter home.

After spending almost two hours on hold with Air Canada, O’Leary got Eva a flight into Gander, N.L., the next day and then purchased a bus ticket home to St. John’s.

After spending a night on her own, Eva arrived home in St. John’s on Jan. 20. O’Leary asked CBC News not to show her daughter’s face. (Submitted by Diomerys O’Leary)

But O’Leary provided a recording of that conversation and the agent said she could not help with accommodations.

Instead, the call centre agent told O’Leary Eva should try a different Air Canada desk and, “needs be a little bit assertive,” when asking staff for help a third time. By this time, O’Leary had already booked the Airbnb herself while on hold waiting to speak to the agent.

Asked about the discrepancy, Air Canada said the agent tried to help, “by instructing the mother on how to proceed.”

Air Canada said it is “generally not advisable” for children to travel alone on trips with connecting or international flights, “due to the possibility of unforeseen flight disruptions outside the airline’s control.”

That warning is not on the airline’s “Children Travelling Alone” section of its website or mentioned in the booking.

A St. John’s mother wants Air Canada to change its policies after her 14-year-old daughter was left to fend for herself in Toronto after her flight home was cancelled. 2:21

Air travel has been hard during the pandemic, with advisories coming and going for Canadians against non-essential international travel and disruptions across the board for carriers.

Still, O’Leary says she has no regrets.

“I tried the first resource, which was the airline. Once they did not do anything I just did everything in my power to keep my daughter safe.”

“They are happy to take my money but not take responsibility for her safety,” she said

Air Canada’s rules, linked to at the bottom of its home page state on page 49 of the 122-page document for international travel that the airline, “will not assume any financial or guardianship responsibilities for unaccompanied minors beyond those applicable to an adult passenger.”

WestJet and Air Transat have the same rule.

Adult passengers get nothing if the flight is disrupted for reasons beyond a carrier’s control, like the labour disruption in St. John’s.

That’s a change in policy. Years ago, Air Canada’s website said — even without the “unaccompanied minor” service — that youths between 12 and 17 would be “taken care of by our agents. We will also arrange for accommodations, meals and transportation if needed.”

The airline removed that policy sometime after January 2013. It did not say why or when it made that change.

Even the relatively new Air Passenger Protection Regulations, which kicked in in 2019, fall short when it comes to protecting young travellers by failing to clearly state an airline’s responsibilities, says Jack.

The regulations say “airlines must establish a program for the transportation of unaccompanied minors,” but leave it to the carriers to decide what those programs include.

Transport Canada makes the rules and the Canadian Transportation Agency (CTA) enforces them. Go Public asked both if they plan to provide more protection for children travelling alone.

Transport Canada said the CTA is “in a better position to respond.”

The CTA said it can only do what Transport Canada’s rules allow, and they don’t include anything about the airlines’ specific responsibilities to minors travelling alone.

Given the lack of more specific legislation, Jack says at the very least airlines need to be more clear that underage children could be left to fend for themselves when flights are cancelled.

After all, it’s happened before.

In 2016, Air Canada was urged to change its policies after a 15-year-old Nova Scotia boy was bumped from a flight and left to sleep on the floor at Pearson. Two years earlier, another teen spent the night alone at the same airport with only a $10 food voucher after his Air Canada flight was turned back en route to Saint John, N.B., due to bad weather.

“We need to recognize that there clearly is a problem here,” with airline staff and possibly government regulation, Jack said.

After hearing from Go Public, Air Canada offered O’Leary a $500 travel coupon “as a goodwill gesture,” which O’Leary says she declined, saying, “it was never about the money.”

She says all she wants is a clear explanation from the airline, but did not get it.

“I can’t just accept what happened to my daughter and I don’t want that to happen to other families.” She says Eva is OK now, but doubts she will fly alone again.