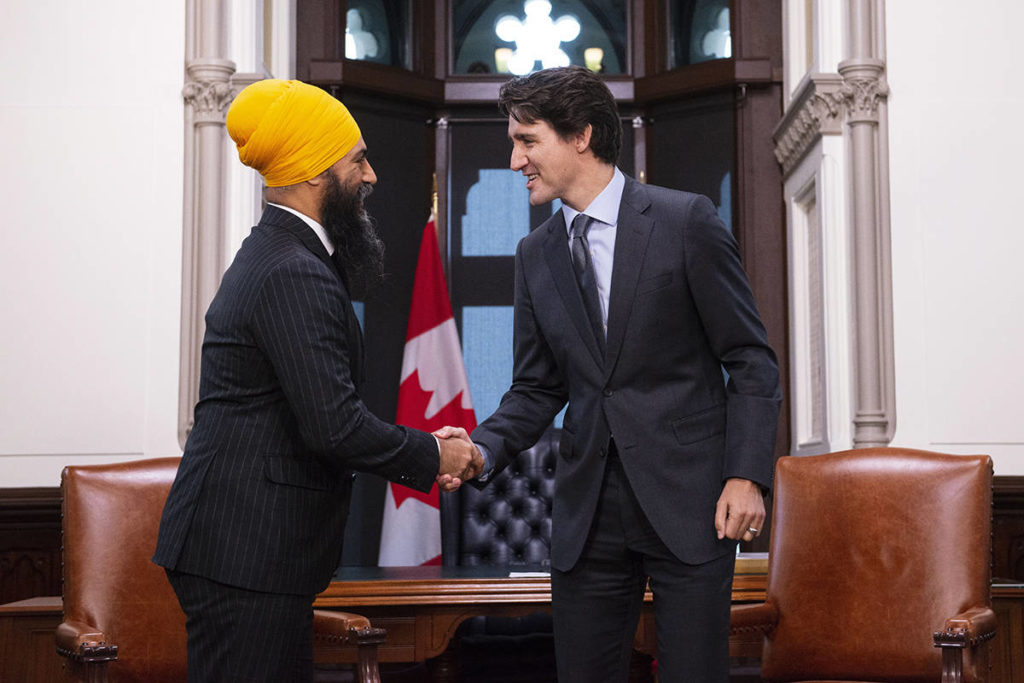 Prime Minister Justin Trudeau says the Liberals have struck a deal with the federal NDP to govern until 2025 in a decision he says will offer “stability” to Canadians in uncertain times.

“Today, I am announcing that the Liberal Party has reached an agreement with the New Democratic Party to deliver results for Canadians now,” he said in a press conference on Tuesday.

“This supply and confidence agreement starts today and will be in place until the end of this Parliament in 2025. What this means is that during this uncertain time, the government can function with predictability and stability, present and implement budgets and get things done for Canadians.”

Trudeau said the deal is one he thought “long and hard” about.

“It was not an easy decision,” he said. “With so much instability around us, Canadians need stability.”

Supply and confidence deals are not the same as formal coalition governments.

A coalition government is when members from more than one party share positions in cabinet.

Supply and confidence deals are when one party agrees to support another in confidence votes for a certain period of time, typically in exchange for progress on specific files.

The CBC and the Globe and Mail had cited unnamed sources Monday night in reports saying New Democrat members of Parliament still need to approve the deal, which would see the Liberals acting on national pharmacare and dental care, which are key priorities for the NDP.

NDP Leader Jagmeet Singh addressed the deal in a press conference shortly after Trudeau and described the deal as “not a destination, but a starting point.”

“This is not at all a carte blanche,” he said.

“We’re going into this eyes-wide-open … if they fall sort on what we’ve agreed to, the deal doesn’t continue.”

Interim Conservative Leader Candice Bergen on Tuesday morning said: “This is not a good day for Canadians.”

“There is, I’m sure, a lot of despair in the West about this decision,” Bergen said.

“We will do everything we can to hold this NDP-Liberal government to account.”

She said the Conservatives are concerned about what the deal will mean for reducing the federal deficit, reducing taxes, and reducing the high levels of inflation currently driving up the cost of living.

“There is no hope for inflation getting under control,” Bergen said.

Trudeau said the agreement does not rule out working with other parties if there are proposals put forward by the Liberal government such as defence spending boosts that the NDP does not support.

He said the deal is aimed at acting on “key policy areas where we share similar objectives” including taxing financial institutions, acting on climate change and reconciliation, pharmacare and dental care.

But he said it is not about giving the NDP control over what the government puts forward.

“It expects the things that we agreed to in this agreement will be in the budget. We don’t believe that Canadians want an election so we will work constructively together.”

Dental care is one example of a measure Trudeau said the government plans to work on this year.

He also faced questions about his own political future and whether he will stay on until 2025.

Trudeau said he is “planning on continuing to serve Canadians through and beyond the next election.”

How will the Liberal-NDP deal work?
Press releases from the Prime Minister’s Office and from the NDP offered insight on Tuesday morning into what the deal will entail, and what policy priorities the two parties plan to work on.

The deal will see the NDP support the Liberals in confidence and supply matters — which effectively relates to bills and procedures in the House of Commons around spending — until June 2025.

That will allow the Liberals to pass four budgets.

The NDP under the terms of the deal will not move votes of non-confidence or vote for any such proposals during the period of the deal. Confidence votes, while traditionally money matters, can also be declared by the prime minister on anything he feels warrants the term.

Trudeau has in the past declared confidence votes on opposition motions in the House of Commons that sought to criticize the government’s conduct, including one in 2020 that proposes a special committee to probe government pandemic spending in the wake of the We Charity affair.

The terms of the Liberal-NDP deal state that the government will inform the NDP “as soon as possible” on anything it declares to be a confidence vote so that the parties can discuss whether the NDP will maintain its support for the government.

An NDP official told Global News the party has the ability to withdraw from the agreement if they feel the government is not “working to help people,” but would not speculate on potential circumstances.

Trudeau and Singh will meet once per quarter, and there will be regular meetings between the House Leaders and Whips for both parties. There will also be “monthly stock-take meetings” by an oversight group of political staff and politicians to discuss progress on key goals.

Will Canadians get dental care, pharmacare?
The deal include numerous areas where the Liberals and NDP say they plan to work together.

Key among those are two promises the parties have eyed for years now: pharmacare and dental care.

Under the deal, the government will launch a new dental care program for low-income Canadians. This is expected to begin with children under the age of 12 this year, then expand to those under the age of 18 as well as seniors and people with disabilities next year. A full implementation would come in 2025.

That program would be restricted to families with an annual income of less than $90,000.

Anyone with income under $70,000 per year would not receive any co-pays.

As well, the Liberals committed in the deal to pass a Canada Pharmacare Act by the end of 2023.

A bill aimed at ensuring safer long-term care provisions will also be tabled, though the details of what that will look like are not yet clear.

Housing affordability is also a key area of the deal.

The deal includes promises to extend the Rapid Housing Initiative for one year, launching a Housing Accelerator Fund, implementing a Homebuyer’s Bill of Rights and “tackling the financialization of the housing market by the end of 2023.”

It also vows a one-time top-up of $500 to the Canada Housing Benefit in 2022, with an eye to renewing that in coming years “if cost of living challenges remain.”