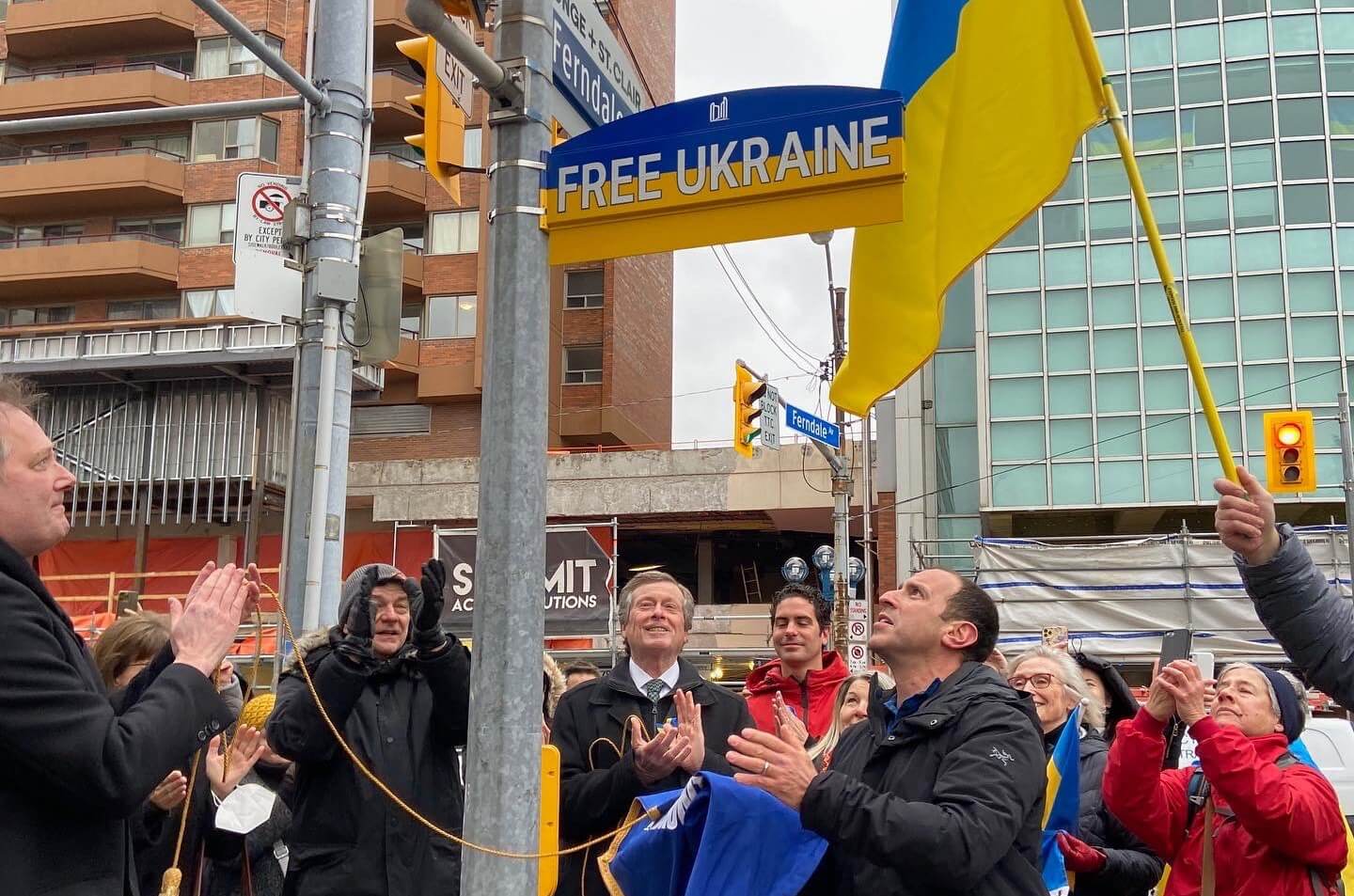 In a show of solidarity with the Ukrainian people, Toronto unveiled “Free Ukraine” signs outside of the Russian Consulate on St. Clair Avenue on Sunday.

The area will now also be called “Free Ukraine Square” on an honourary basis.

Speaking at the unveiling Sunday morning, Toronto Mayor John Tory said he wanted to make it clear that the city “joins the rest of the world in expressing our absolute outrage at what is going on in Ukraine” and at the “unlawful, treacherous, murderous invasion that is taking place.”

Tory said the signs “send a message” to Russia that Ukraine should be free.

“‘Free Ukraine’ means back to being a free Ukraine where people are not faced with this atrocious invasion,” he said. “Where people have the kinds of freedoms we value in this country, and that they value as Ukrainians.”

Tory said he hopes that when Torontonians see the signs, they will be reminded that the city stands in solidarity with Ukraine and its people.

“But even more, we hope that every single person every day that walks into that Russian consulate is reminded of what they are doing, of the atrocity of what is going on with this illegal, murderous invasion,” Tory continued. “And that maybe, just maybe, some of them will have the conscience to be in touch with the people they work with back in Moscow and to indicate to them that the people in Toronto stand solidly against what is going on in Ukraine.”

Tory said he will be meeting on Monday with a task force that has been established within the city’s government to ensure the city is doing everything possible to welcome Ukrainian refugees fleeing the war to Toronto.

“It is a full-blown genocide to annihilate a nation that wants nothing more than peace and to live in freedom on their own land,” he said.

“I have a friend in Kyiv that says ‘we see all of it, we see the reports. We see the Ukrainian people, Ukrainian-Canadians, Canadians, Americans, Europeans standing with us,’” Schturyn said.

“It is vital to them that we continue to do this until Ukraine wins and sends the Russians back home.”

Coun. Josh Matlow said the city is “building a mountain of support” for Ukraine.

“Every individual, every one of us contributing to a common cause together,” he said.

Matlow thanked Tory for his “steadfast support” of the Ukrainian community in Toronto and across Canada, and for “working so closely” with Schturyn.

He also thanked the Ukrainian Canadian Congress for their “remarkable efforts to lead the protests and the rallies in support of Ukraine and against the inhumane, terrible, horrific attack on democracy and the very lives that people wish to be living in Ukraine.”