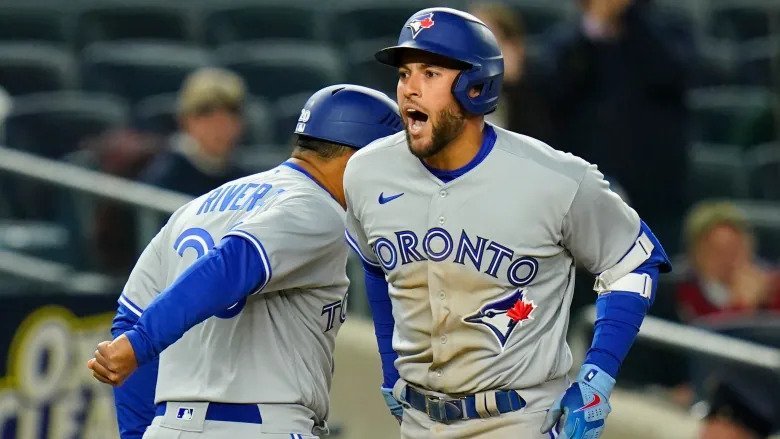 Greeted by boos at Yankee Stadium, George Springer responded with the type of racket he and his Toronto Blue Jays are ready to make.

Toronto is off to a 3-1 start after missing the playoffs last year despite a 91-71 record.

“I think that the world is probably a little bit behind what we thought, but we’ve always been confident in what we can do,” shortstop Bo Bichette said. “We’ve known that we had an ability to make some noise for a few years internally. Obviously, we didn’t. But I think this is the first year that people are kind of on board.”

Bichette made two sparkling plays, Teoscar Hernandez had a great grab in right field and Alek Manoah (1-0) allowed one hit over six innings.

Manoah permitted only Joey Gallo’s opposite-field single with one out in the second. The 24-year-old right-hander struck out seven and worked around four walks, helping the Blue Jays extend their Yankee Stadium winning streak to five.

He pitched six shutout innings of two-hit ball to win his major league debut in the Bronx last May 27.

“It’s the mecca,” Manoah said. “You kind of want to come in, you want to play hard. There’s a lot of fans here and it’s just an exciting ballpark to play in and something you dream of as a kid.”

Springer followed Espinal’s third-inning single by pulling a slider from Jameson Taillon (0-1) into the left-field seats for his second homer in two days. Espinal hit a two-out single in the seventh and scored when Springer sliced a fastball to the opposite field for a doubl e on two hops to the right-field wall.

Manoah loosened up before the game with a football, then mixed 44 fastballs, 22 sliders, 18 sinkers and 15 changeups, getting five swings and misses on fastballs, four on sliders and three on changeups.

He walked the bases loaded in the third before Giancarlo Stanton hit a broken-bat grounder to Bichette, who made a backhand pickup and off-balance throw to first from the edge of the outfield grass.

Hernandez slid to grab Kyle Higashioka’s looper into short right field with two on in the seventh after Gleyber Torres’ leadoff single off Trevor Richards and Aaron Hicks’ walk.

Espinal, shifted to the left side of second, ranged back to the right side of second to glove pinch-hitter Josh Donaldson’s 106 mph grounder against Adam Cimber. Espinal flipped to Bichette, who made an acrobatic, 360-degree turn at second and threw to first for an inning-ending double play.

Jordan Romano finished the four-hitter for his third save and franchise-record 26th in a row dating to last season, and the Yankees lost their second straight after opening with two wins. Of the seven times New York was shut out last year, two were against Toronto.

“They made a couple big plays when they did get in trouble, but for the most part Manoah was in control,” Yankees manager Aaron Boone said.

Montoyo said before the series opener at Yankee Stadium that Jansen felt soreness in his side while swinging, was having a scan and would not be available for the game. Shortly before the first pitch, the Blue Jays placed Jansen on the IL.

Jansen was 4 for 7 with two home runs in the opening series against Texas.