Geri Dornford remembers all too vividly the day she learned her friend Brittney Newman had been killed. She’d seen a news report about a homicide in the Mississauga, Ont., neighbourhood where she was staying.

“I just got a chill,” said Dornford, who had seen her friend just a few months earlier.

Later that day when she returned home, Dornford’s phone rang, and her worst fear was confirmed.

“I just about almost collapsed.”

Newman, 25, was stabbed to death in her home in February 2020 with her two young children present. Her former partner was charged with second degree murder in connection to her killing.

Dornford and Newman’s grandmother told CBC News Newman’s relationship was abusive and that Newman tried to escape multiple times but struggled to get into shelters and become financially independent.

In Peel Region west of Toronto, a new police unit that works in collaboration with community organizations is hoping to make it easier for victims of domestic violence to get help by connecting them to a centre where all the resources — such as information on housing, finances and child care — are under one roof.

While advocates welcome the initiative, they say more could be done to prevent intimate-partner killings.

A 16-month CBC News investigation analyzed nearly 400 cases of intimate partner homicide between 2015 and 2020 across the country and found more than one in three people accused of intimate-partner homicide demonstrated at least one warning sign prior to the killing.

In the case of Newman, Dornford said the warning signs were there. She described the relationship as abusive and controlling to the point where, at times, Newman wasn’t able to leave the house.

Dornford says her friend tried to leave, but it took her four or five attempts before she could get space at a shelter and leave for good.

“That’s why … you will find a lot of women after they’ve left, they may not want to, but they end up returning. Because, again, not enough resources, finances, you know,” said Dornford.

For years, domestic violence has also been the top reason people call Peel police, but between 2015 and 2020, the force noticed an alarming trend: over that period, the number of those calls went up by 74 per cent.

“In 2020, that equates to about 25 calls a day that our officers were attending for domestic violence and family violence,” said Lisa Hewison, an inspector with the crimes against persons team at Peel Regional Police.

“So we knew that we had to do something more.”

In April 2021, Peel police launched an intimate-partner-violence unit — a dedicated team of 40 constables and eight detectives. When there’s a domestic violence call, frontline officers reach out to the unit if there are grounds for criminal charges.

The unit assists the victim, bringing them not into a police station but to the Hon. William G. Davis Centre for Families in Brampton, also known as the Safe Centre of Peel.

“We found with victims, for reporting, there was always a fear of police — fear that they had to go into a police station to report,” said Hewison.

The team has been busy fielding an estimated 250 to 300 calls a month, which have resulted in 600 to 700 charges being laid.

Importantly, Hewison said, it has also connected victims with support services and the resources they need to leave a dangerous situation.

One of the major challenges when a victim of domestic violence is trying to flee a dangerous relationship is accessing various systems of support, such as financial, immigration or housing.

“When people come to this Safe Center, they tell their story once. They get all the services that they need, and they get the support around navigating the system,” said Shelina Jeshani, director of programs at Catholic Family Services Peel-Dufferin, the main agency that co-ordinates services at the Safe Centre of Peel.

The model was designed with input from survivors of domestic violence.

“Victims told us they did not want to take their children and go sit in police stations and talk to police,” Jeshani said. “It was intimidating. It was scary. And so they needed to be in a safe, nurturing environment where they had supports around them.”

Jeshani said there’s no obligation for women who come to the centre to file a police report.

“They don’t have to talk to police,” she said. “They come, and they get the services that they need. We also can talk to them about what can happen if they talk to police, so they are well informed and they know their rights.”

Nneka Macgregor, co-founder and executive director of the Toronto-based non-profit Women’s Centre for Social Justice, also known as Women at the Centre, says while she welcomes initiatives like the Safe Centre and Peel police’s dedicated unit, many women of colour experiencing violence still don’t feel comfortable interacting with police.

According to the CBC investigation, 30 per cent of the close to 400 victims of intimate-partner violence were Indigenous or racialized.

“Indigenous women, trans women — there’s a whole host of survivors who police will never be an option for them,” said Macgregor.

She says there needs to be more funding for community initiatives such as peer-to-peer supports as well as measures to prevent violence in the first place.

“More funds need to be dedicated to supporting men who have used violence because right now, the piecemeal, ad hoc programs that are in place are not effective.”

As for Dornford — she says she’s pleased resources like the Safe Centre exist but says models like that need to be replicated across municipalities.

Dornford — who herself is a survivor of domestic violence — says she will continue to call on all levels of government to do more.

“Am I going to reach everybody? No, but I will [reach] a few. And that makes it worthwhile,” Dorforth said of the advocacy work she does.

“I’m going to keep doing this as long as I have breath in my body.” 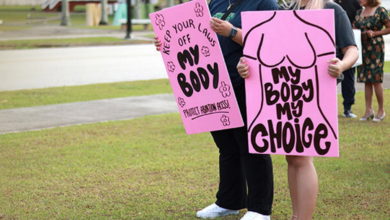