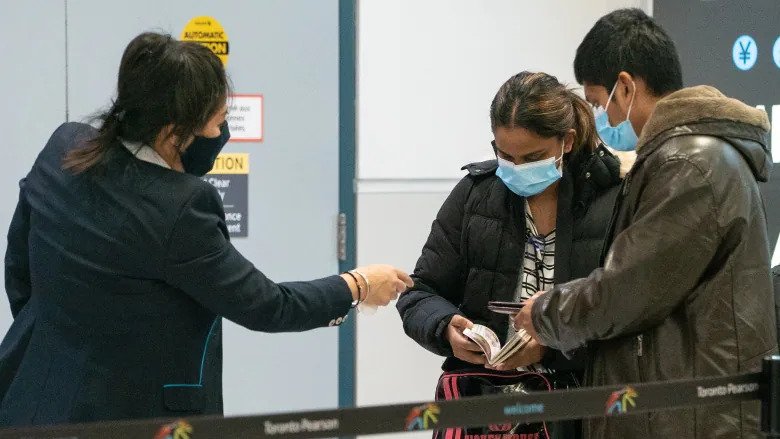 Two infectious diseases physicians have joined forces with the travel industry to call for an end to Canada’s pre and post-arrival COVID-19 testing requirements for fully vaccinated travellers.

Over the past several months, members of the beleaguered travel industry have repeatedly lobbied Ottawa to relax its travel restrictions.

At a news conference held at Toronto’s Pearson International Airport on Thursday, Dr. Dominik Mertz and Dr. Zain Chagla — along with the Tourism Industry Association of Canada — argued that Canada’s testing requirements for travellers are pointless, because Omicron has already spread across the country.

“The risk for the average traveller coming in is in the same ballpark as if you were testing a random person in downtown Toronto. It’s not going to make a difference,” said Mertz, an infectious diseases specialist with McMaster University in Hamilton.

The federal government said it’s reviewing its border measures, but has yet to make any changes.

“Even fully vaccinated individuals can still become infected with the virus that causes COVID-19,” said Public Health Agency spokesperson Tammy Jarbeau in an email. “For this reason, it is important to continue taking precautions by testing travellers both prior to entry and on arrival.”

Under Canada’s current rules, travellers entering the country must show proof of a negative molecular test (such as a PCR test) taken within 72 hours of their departing flight or planned arrival at the land border. Travellers have to pay for the test, which can cost hundreds of dollars.

The government is also spending millions of dollars to randomly test thousands of vaccinated travellers daily upon arrival.

At the news conference, Chagla argued the money spent on tests by both the government and individuals is a wasted expense.

“There is something to be said about the cost here, both for the individuals but [also] for the public for testing that may not … be preventing a lot of people from spreading COVID-19 locally,” said Chagla, an associate professor at McMaster University.

Jeannette Smith, of Porters Lake, N.S., feels the $300 US she spent on two PCR tests to return to Canada was a waste of money. Smith and her husband drove to Fairfax, Va., in December to visit their daughter.

The couple paid for expedited PCR tests in Fairfax. The results were supposed to arrive within two days, but, due to high demand, they didn’t arrive in time.

Smith said the couple decided to cross the border anyway, because a snow storm was coming and they feared it would lead to highway closures.

She said they didn’t get fined, but that a Health Canada official at the border noted on their files that they entered the country without a test.

“We’re really concerned about when we cross the next time,” said Smith. “Here we are doing everything that we’re supposed to do, following all the rules to the letter, and it still didn’t work out.”

Smith and her husband finally did get their negative test results — after they arrived home. She said she supports Canada’s COVID-19 measures, but believes the time has come to relax the rules for fully vaccinated travellers.

“We’re getting to the point with the pandemic that more and more people are vaccinated and [we should] allow a little more freedom for those people.”

Other health experts generally agree, but with caveats

CBC News asked 10 other medical professionals their opinions on dropping testing requirements for travellers. In general, they supported nixing the current testing rules for fully vaccinated travellers, but some listed caveats.

Several recommended that travellers take a pre-arrival antigen test instead of a molecular test. Although PCR tests can be more accurate, antigen tests are much cheaper and can provide results within minutes.

“The other passengers and the people who are working on that flight should not have to be on a flight with someone who is positive,” said Tara Moriarty, an infectious disease researcher and associate professor at the University of Toronto.

“Rapid tests are probably a better way to go and then that’s also something that can be done at the airport.”

Dr. Prabhat Jha, an epidemiologist at St. Michael’s hospital in Toronto, also recommended switching to antigen tests, and suggested the government change the definition of ‘fully vaccinated’ to those who have also had their booster shot.

Montreal epidemiologist and cardiologist Dr. Christopher Labos cautioned that if Canada dropped all test requirements, it would need to have a solid plan in place to quickly redeploy them if necessary.

When it comes to arrival testing, Moriarty said she would like the government to still do surveillance testing of some travellers, but without requiring them to quarantine while they wait for their test results.

“All the resources that are put into this would be far better deployed into surveillance … so that we have some eyes on what might be coming in terms of variants.”

At a news conference last month, Chief Public Health Officer Dr. Theresa Tam suggested surveillance testing, rather than mass testing of passengers upon arrival, would be a better use of resources.

“It is a capacity drain on the systems as a whole,” she said. “The whole world has Omicron.”

Some countries, such as the United Kingdom and Demark, have dropped all test requirements for fully vaccinated travellers.