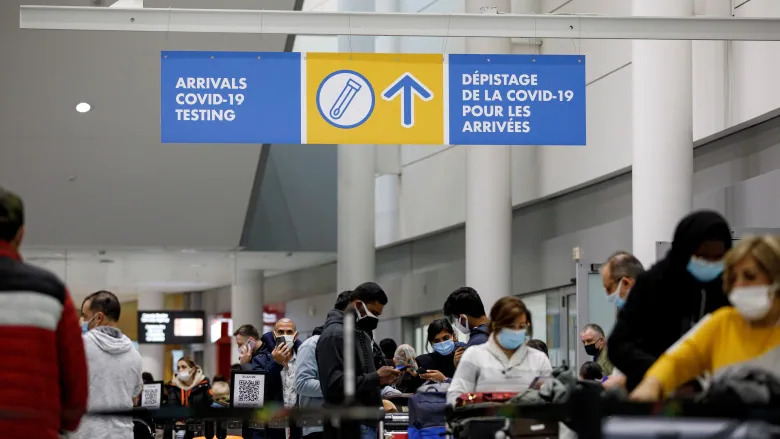 The federal government announced Thursday that Canada will end its pre-entry COVID-19 testing requirement for fully vaccinated travellers by the end of the month, CBC News has learned.

Canada is removing the testing requirements at airports and land border crossings. The ministers of health, transport and tourism held a press conference Thursday morning to announce the changes to border measures.

Currently, travellers entering the country must show proof of a negative antigen or molecular test prior to their flight or arrival at the border.

That testing requirement will be dropped by April 1 for fully vaccinated travellers.

The move comes two years into the pandemic as travel picks up and provinces and territories end restrictions involving vaccine passports, gatherings and masks.

The federal government will continue to randomly test travellers upon arrival in Canada to identify and track variants. The government has been spending millions of dollars on randomly testing vaccinated travellers entering Canada.

Speaking in Alliston, Ont. on Wednesday, Prime Minister Justin Trudeau did not say when the testing regime would end but suggested that more COVID-19 measures will be rolled back.

“The federal government has eased some of the measures at the borders just a few weeks ago. We’re going to continue to look at what more we can do,” he said.

Zain Chagla, an infectious diseases specialist and associate professor at McMaster University, told CBC News that eliminating the testing is a wise move that could have been made some time ago.

“There wasn’t even really a need for this kind of testing back in February when I think the advocacy came in,” Chagla said.

“I’m glad that we’re aligning with many of our partner countries and dropping this type of testing in order to really make sure that travellers feel secure in their travel and aren’t necessarily subject to more expense or inconvenience.”

Chagla said that once the Omicron wave hit Canada, the disease was so widespread that testing at the border became essentially useless.

The hassle of getting tested in the U.S.

Some Canadians who have travelled south of the border told CBC News that pharmacies in the U.S. do not certify that someone tested negative for COVID-19 using a rapid antigen test.

Dax Wilkinson, the founder and president of Red Canoe, a clothing company, told CBC News that pharmacies would only provide documentation related to a nucleic acid amplification test, which cost $99 USD per person.

“It was a challenging and frustrating experience to jump through the hoops to get these tests,” he said. “We were under the impression that we could basically pick up a rapid antigen test anywhere at any pharmacy in the U.S. and bring that result to the border and come back into Canada.”

Wilkinson said that some pharmacies do not perform the test while others require an advance appointment that makes the whole process difficult, time-consuming and expensive.

The travel industry has been lobbying the government to ease these testing requirements. Consumers have complained that it’s expensive and a hassle to find approved testing facilities abroad. Some PCR tests cost upwards of $200, while antigen testing typically costs well under $100.

The Canadian Travel and Tourism Roundtable, an industry group, called the testing requirement a “non-science-based” obstacle undermining the sector and a “significant deterrent, discouraging international companies from resuming travel into Canada.”

The group pointed out that the United Kingdom, Denmark, Switzerland and Ireland were among the countries that had dropped the testing requirements already and urged Canada to do the same by April 1.