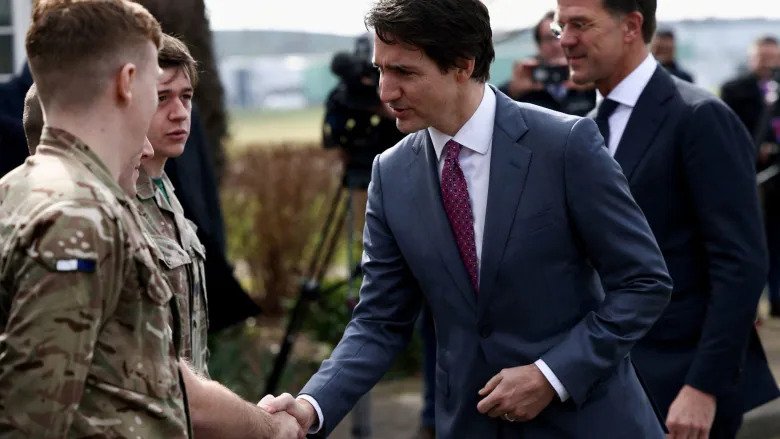 When Donald Trump was making his most strident complaints about NATO allies spending too little on defence, some member nations — Canada, the Netherlands and Germany, in particular — seemed largely unmoved by the now-former U.S. president’s broadsides.

But Russia’s war on Ukraine — with all of its brutality and destruction — over the past two weeks seems to have succeeded where Trump and his predecessor, Barack Obama, failed.

At the best of times, debates about defence spending as a percentage of gross domestic product are sterile affairs that engage accountants, statisticians and those interested in the military — and almost no one else.

Prime Minister Justin Trudeau, U.K. Prime Minister Boris Johnson and Prime Minister Mark Rutte of the Netherlands presented a study in contrasts on Monday when reporters asked whether Russia’s attempt at regime change in Ukraine would goad allies into meeting the NATO spending benchmark of two per cent of national GDP.

Germany — perhaps the most pacifist power in Europe — overturned decades of foreign policy when Chancellor Olaf Scholz ordered weapons shipments to help prop up the government of Ukrainian President Volodymyr Zelensky and pledged to meet NATO’s spending target. (At the moment, Germany spends 1.5 per cent of its GDP on defence.)

Canada currently spends 1.39 per cent of its GDP on defence. Trudeau has long argued that his government has a plan to increase the defence budget to $32 billion over several years.

But Ottawa has never even pretended to have a plan to meet the two per cent target, despite the fact that the Conservative government of Stephen Harper committed to it in 2014, after Russia’s annexation of Crimea.

On Monday, Trudeau offered a sign — grudgingly, his critics would say — that his government’s often-touted defence policy could be swept away by the invasion and the threat of war in Ukraine spilling over into other parts of eastern Europe.

In front of both Johnson and Rutte, Trudeau said his government recognizes “that the context is changing rapidly around the world, and we need to make sure that the women and men who serve in the Canadian Armed Forces have all the equipment necessary to be able to stand strongly, as we always have as members of NATO.

“We will continue to look at what more we can do.”

Johnson — whose country spends 2.29 per cent of GDP on defence, according to the latest NATO figures — would not criticize Canada’s defence spending, but agreed with Trudeau that the world is no longer the same after Russia’s naked aggression.

“We’ve got to recognize that things have changed and that we need a new focus on our collective security,” Johnson said. “And I think that is increasingly understood by everybody.”

Given their place on the European continent, the Dutch haven’t needed much convincing. Rutte said the country’s cabinet decided in January to ramp up annual military spending by billions of euros. Right now, the Netherlands spends 1.45 per cent of its GDP on defence.

“This will bring us closer to the two per cent and probably we need to do more, particularly given what has happened over the last two weeks,” Rutte said. “But the Netherlands will spent a lot of extra money on defence, and I think rightly so.”

After meeting with Johnson and Rutte in the U.K. on Monday, Trudeau departed for Latvia, where Canada has over 500 troops taking part in NATO’s mission to reassure the three Baltic states being rattled by Russia’s violence.

Trudeau started Tuesday by meeting with Latvian Prime Minister Arturs Krisjanis Karins. The two of them met virtually with the leaders of the other Baltic states.

“It’s an important time for us to be standing together, as we have in the past few years, but particularly with the situation in Ukraine,” Trudeau said as he met Karins.

“This is a moment for friends and allies to stand together. And that’s exactly what we’re doing. We’re not just standing up for territorial integrity… We’re also standing up for the principles and values underlying our friendship and societies.”

Later, in addressing the prime ministers of Estonia and Lithuanian, Trudeau spoke about the insecurity each nation must feel.

“You are literally on the front lines of this challenge with Russia,” he said. “And we have been here for a number of years and will continue to be together, not just because we are friends, not just because we share values, but because we believe in a shared future of peace and prosperity for people and pushing back against the Russian aggression that is absolutely unacceptable.”

Trudeau said these countries have been living not just with the military threat and a history of occupation, but “also the daily use of propaganda and disinformation to try and undermine the democracy and the values you have, something that is right now being weaponized against Ukraine, but also used very actively in all democracies around the West.”

Trudeau and others in his government have argued over the years that there are other ways to measure the utility of a country’s military contributions — that it should be judged based on the value of its deployments of troops, equipment and expertise, for example.

A recent report from Carnegie Europe tended to agree, arguing that the two per cent target is not an accurate benchmark for measuring military capability.

After the events of the past two weeks, that argument may be moot.