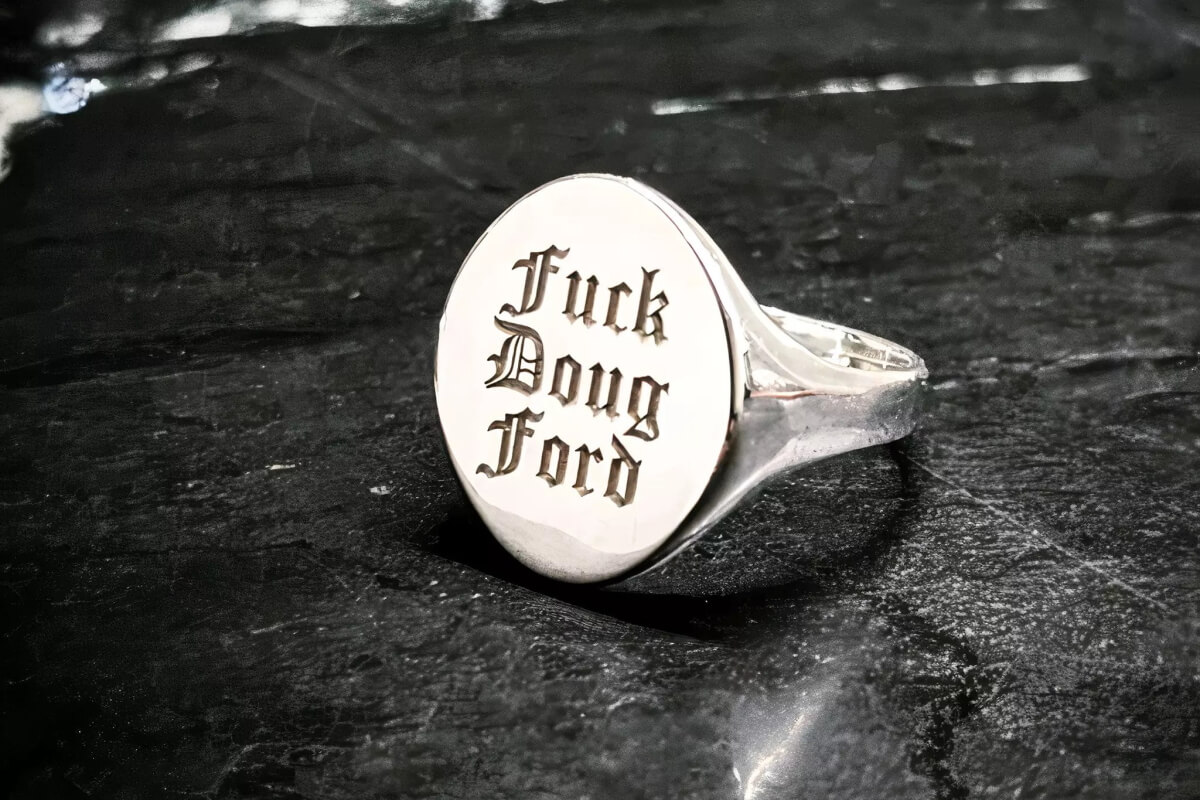 After the lengthy, tumultuous saga that has been Ontario‘s handling of the pandemic, many people share the same very strong feelings about Premier Doug Ford, whether they arose as a result of his team’s [mis]management of the health crisis, or already existed due to other policies and perhaps simply grew because of it.

One Toronto artist decided to take their distaste for the infamous leader and his platforms to a new level, and thus the epic “fuck Doug Ford” ring was born.

Tattooer Jay Rose brought her idea to fellow Parkdale creator, jewellery maker Liane Vaz, who has a storefront just a short walk down West Queen West from Rose’s own shop, Delete After Death.

The time was May 2021, in the middle of another one of Ford’s phased plans to lift lockdown restrictions, during which both artists took particular issue (like many residents did) with the fact that malls and big box stores were permitted to remain open while small businesses were forcibly shuttered and struggling.

“Initially the rings were made due to the opening date delay and blindsiding small businesses with that after they had purchased hundreds of dollars of PPE, etc.,” Rose explains of her inspiration.

And so, after hiring Vaz on for the project, frustration was forged into a large statement signet ring with a simple message, while both the tattoo and jewellery shops were closed to the public.

As the online description of the work and the thought behind it details: “Many small businesses closed due to the incompetence of the provincial government in Ontario. And with that we say, fuck you Doug Ford!”

Images of the sterling silver piece have understandably evoked a ton of conversation every time they’ve been shared on social media, including when Vaz re-shared a post again this week to her business account after another of the premier’s moves incensed her.

“I learned how many COVID tests were distributed to private schools in comparison to other sectors like paramedics, shelters and jails,” Vaz says, also expressing concern about the Ford leadership’s licence plate sticker rebate initiative to get more votes — something she worries may prove successful.

“I run a small business as a custom goldsmith and I have a lot of friends who run small businesses as well. We are all pretty fed up when it comes to support from his government. The ring is a tiny piece of rebellion that Jay and I can put out into the world.”

Unfortunately, though people seem to find the item hilariously amazing, not a single ring has sold thus far, which Vaz believes is because no one wants to drop $280 on something with the premier’s name on it.

“But it does make for great photos and always starts a buzz, both negative and positive, when we post about it,” she says.

The made-to-order rings are still available from Delete After Death’s online shop for anyone who is interested, and will remain for sale until Ford is out of office.

Rose and Delete After Death are also planning to donate any profit from sales of the piece to a relevant local organization or charity.